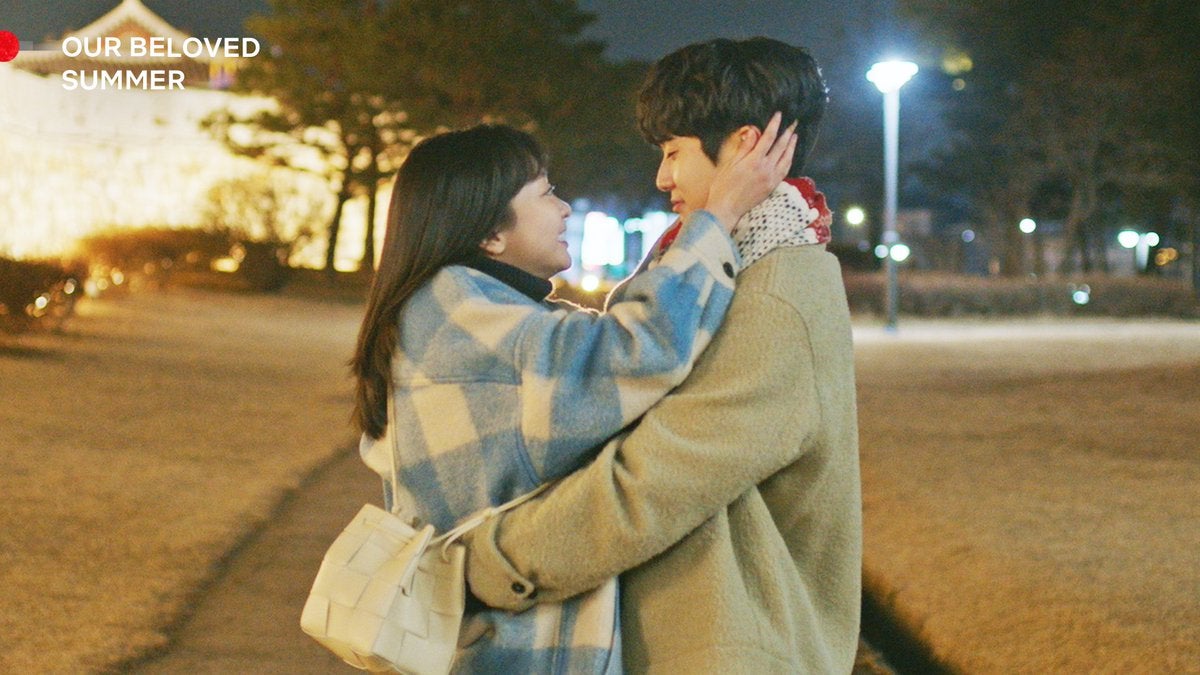 5 Reasons Why “Our Beloved Summer” Is A Heartwarming Drama

The Original K-Drama Our beloved summer has been in everyone’s views, newsfeeds, and watchlists since it first aired, and for good reason. Although originally following the usual “first love” trope used in K-Dramas, this drama stands out for showcasing the pure, heartbreaking pain one experiences in a relationship.

Our beloved summer sees fate bring former lovers Choi Ung and Kook Yeon-soo back into each other’s lives to shoot a documentary after the one they shot 10 years ago went viral. At a timely pace, Ung and Yeon-soo find themselves for each other while confronting their own unresolved emotions, past and present. Call it a slow-burn type of romance if you will, because it is.

As the story moves from the past to the present, viewers can’t help but fall in love with Choi Ung and Kook Yeon-soo’s dynamic – from enemies to lovers, strangers, then love again. For many viewers, their whole story brought butterflies, feelings, and brought out emotions they never thought they would have.

Nonetheless, the drama was a comfort to watch, and here are 5 reasons why Our beloved summer is that comfort drama we didn’t know we needed (maybe second to Hometown Cha-Cha-Cha).

From the drama alone poster, Our beloved summer gave off a seemingly nostalgic and sweet vibe. Once aired, it still kept the same feel throughout. Coupled with a soundtrack that captured the drama’s sensibilities, most notably BTS V’s “Christmas Tree,” the drama brought a sense of comfort one usually sees or feels when around someone. that feels like home.

All the characters had their own storyline and depth, which makes each of them relatable

Kim Ji-ung’s character is a good example of this, while Ji-ung was sort of the typical male supporting role who also had feelings for the female lead, he didn’t try to ruin the development of Choi Ung and Kook Yeon-soo. and dealt with his own troubled past and present. He also remained a good friend to both Ung and Yeon-soo, despite the pain caused by how he was rejected. His character could be put side-by-side with Ji Seong-hyun from “Hometown Cha-Cha-Cha.”

It’s a breath of fresh air from the K-Drama universe to see the supporting characters’ own stories presented alongside the main plot, it sends the message that they are also their own main characters in their own way.

The 5 love languages ​​have been seen in the simplest actions 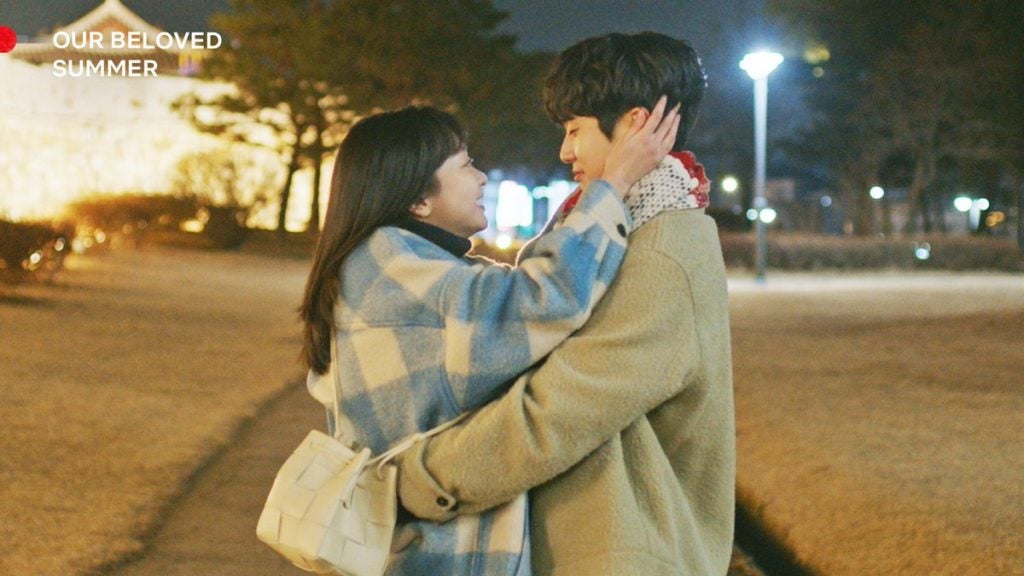 If you are familiar with Gary Chapman’s concept of the 5 love languages, then you must have seen manifestations of all five through Choi Ung. Ngl is what made viewers fall in love with Choi Ung’s character even more – his consistent and subtle ways of showing how much he loves Kook Yeon-soo.

Acts of service: It was Choi Ung’s main way of showing his love, and was seen in scenes where he dried Yeon-soo’s hair, carried an umbrella over her while getting wet, preparing her food, helping her to carry his bag, etc.

Physical touch: Ung and Yeon-soo liked to hold or touch hands, and the part that really gave most viewers butterflies was when Ung unknowingly reached for Yeon-soo’s hand while he was sleeping. God, looking back now, that was the peak of slow burn romance (jk)

To receive presents: Yeon-soo first said she didn’t like receiving gifts, but after years she finally admitted that she only said it for Ung to save his money and not bother him, when she really loves them. In response, Ung bought jewelry and other things for her now that he could do so freely.

Quality time: When Ung and Yeon-soo were “trying” to be friends, Ung willingly canceled his busy schedule to spend time with her. Yes, what a guy indeed. Other examples of this were when they were reading a book together or just watching television.

Words of affirmation: After a decade of waiting for Ung to finally tell her he loved her, Yeon-soo finally got to hear those three words in the latest episode.

This wire on Twitter explained it best, to be honest. Choi Ung, what a guy. Is this what it’s like to fall in love with a “guy written by a woman”?

The ups and downs of a relationship were shown realistically 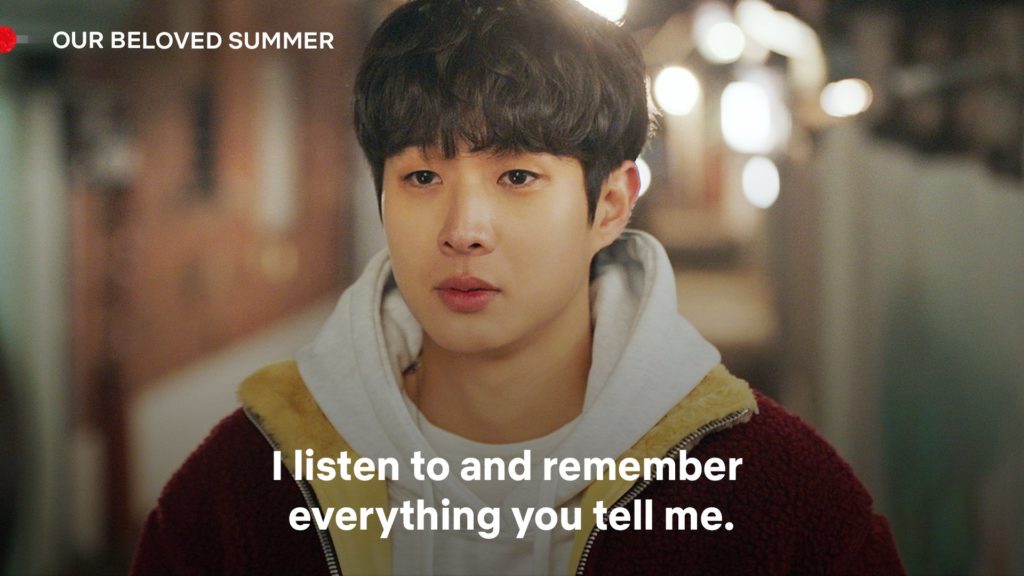 Although we all loved seeing the highs of Ung and Yeon-soo’s relationship, we can’t help but feel those lows as well. These conflicts all felt so real and oh so familiar, that we can’t deny these heartbreaking emotions that simply pull our hearts into a depth we can’t even describe.

That’s what makes this drama so appealing: the realistic portrayal of relationships. The effects of miscommunication, the frustrations of unresolved and lingering feelings, the post-breakup awkwardness, everything that seemed so common, negative and taboo was shown in this drama.

We can’t help but feel it so deeply in our own emotions, especially if we’ve experienced something similar to Ung and Yeon-soo’s relationship.

He showed that love persists even during times of pain and sadness.

Our beloved summer showed that even if one encounters obstacles or difficulties in his life, the feeling of love is always there. Love, in this case, is not limited to the romantic genre.

In times when we feel we are at our worst, we tend to forget that we are surrounded by people who will help, support and comfort us: friends, family and even acquaintances. When Yeon-soo was trying her best to deal with her breakup with Ung, Seol-yi never left her despite the former not telling the latter her true feelings. Yeon-soo’s grandmother, a main figure in Yeon-soo’s life, also loved her granddaughter to the fullest and gave her the comfort she always needed all her life.

The same with Ung when he was trying to get over Yeon-soo, Ji-ung and Eun-ho stayed by his side and were with him all the time. This was also seen with Ji-ung when he was gripped by the fact that his estranged mother was dying, Jeong Chae-ran, Park Dong-il, and Choi Ung were there to give him solace and solace.

Love always persists, especially in times of heartbreak and pain. This drama summed up those feelings well, capturing the essence of platonic, storge (family love), and romantic love.

No more words could ever describe the feeling of watching Our beloved summer better than the word “comfort”. The drama was a joy to watch, heartwarming to say the least, thanks to writer Lee Na-eun depicting the small nuances and details of everyday relationships in the simplest of words.

Watching Choi Ung and Kook Yeon-soo’s relationship blossom into something beautiful, pure, and full of love was an experience every viewer is unlikely to forget. It was a beautiful drama to begin with – I can’t help but say I’m very much in love with the story and all the other details.

And if those reasons won’t convince you to watch this drama, then let the Facebook and Twitter posts and TikTok videos do, because this drama is just a big green flag.

To All The Red Flags I’ve Loved Before: All About K-Drama “Nevertheless”