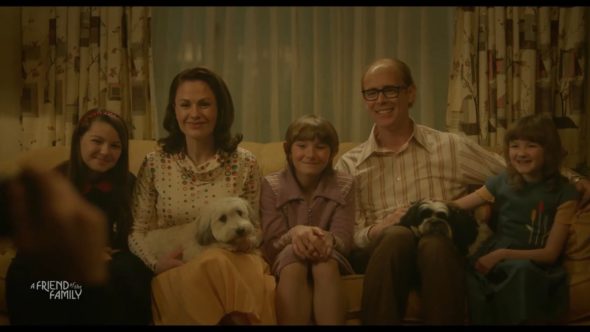 Peacock revealed more about the new series in a press release.

A FAMILY FRIEND is based on the heartbreaking true story of the Broberg family, whose daughter Jan was kidnapped multiple times over a period of a few years by a charismatic and obsessed “friend” of the family. The Brobergs — dedicated to their faith, family, and community — were completely unprepared for the sophisticated tactics their neighbor used to exploit their vulnerabilities, tear them apart, and turn their daughter against them. This is the story of how their lives were forever changed – and how they survived.

Produced by: UCP, a division of Universal Studio Group

ANNA PAQUIN (Flack, The Irishman, True Blood) will play the role of Mary Ann Broberg. Mary Ann is a mother of three daughters, and her life felt safe, happy and fulfilling until recently. She realized too late that she may have missed warning signs and made a terrible mistake in growing closer to her charismatic neighbor Robert Berchtold – and trusting him around her eldest daughter, Jan.

JAKE LACY (The White Lotus, Being the Ricardos) will play Robert “B” Berchtold, a charming local businessman who appears to be a genius Mormon father and husband. An expert in manipulation, he puts everyone around him at ease as he painstakingly plots the kidnapping of Mary Ann’s daughter.

LIO TIPTON (The Edge of Sleep, Why Women Kill) will play Gail Berchtold. Gail is the wife of Robert Berchtold and the mother of a large family. Her husband suffers from mood swings and this caused him to act erratically. Gail’s worries about her husband may keep her nervous, but she could never have expected what her husband would end up doing.

MCKENNA GRACE (Ghostbusters: Afterlife, Handmaid’s Tale) will play the role of Jan Broberg in the following years. Jan is the eldest daughter of Bob and Mary Ann Broberg and leads a happy, traditional life in an idyllic American town. Jan trusts family friend and neighbor Robert Berchtold, though he has plans for her kidnapping that she doesn’t suspect.

HENDRIX YANCEY (George & Tammy, Unbelievable) will play the role of Jan Broberg in the early years. Jan is the eldest daughter of Bob and Mary Ann Broberg and leads a happy, traditional life in an idyllic American town. Jan trusts family friend and neighbor Robert Berchtold, though he has plans for her kidnapping that she doesn’t suspect.

Check out the trailer for A family friend below.

What do you think? Are you planning to discover this new series on Peacock?

Discover our state sheets to track pickups, renewals, and cancellations of new TV series. You can find lists of canceled shows here.
2022-09-14
Previous Post: Mariner Drama will present “Winnie the Pooh” – The Voice
Next Post: The Wonder Review – Florence Pugh Is Miraculously Good At A Weird Drama | Toronto Film Festival 2022