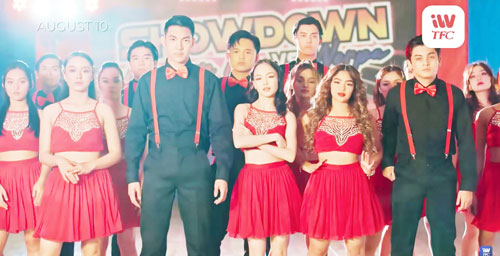 Andrea Brillantes and Seth Fedelin are teaming up again in “Lyric and Beat,” iWantTFC’s first original light musical drama series that will have audiences singing and dancing to the beat of their dreams starting August 10.

Along with the kilig brought by the SethDrea tandem, the musical series also features jaw-dropping performances from the ensemble cast as “Lyric and Beat” is filled with incredible song and dance numbers featuring the music. by legendary composer, Jonathan Manalo.

Written and directed by Dolly Dulu, who is behind the hit films ‘The Boy Foretold by the Stars’ and ‘Love Beneath the Stars’, ‘Lyric and Beat’ is influenced by her background in theater and exposure. to television musicals like “High School Musical” and “Camp Rock”.

Dolly also admitted during the big press conference that it was difficult to create a musical series because the actors had to do singing and dancing rehearsals in addition to acting workshops.

“Nakaka-proud kasi it’s music serial like in legit music serial and hindi talaga nagpapahuli ang acting. Bawat episode can have naha-highlight character and bawat isa sa kanila, hindi talaga nagpahuli,” Dolly said, pointing out that the series is not just about Lyric (Andrea) and Beat (Seth), as each episode focuses on an actor.

“Lyric and Beat” begins with the story of Lyric (Andrea), a driven teenager who wants to be a famous singer like her late mother.

When Lyric enters as a scholarship recipient of the prestigious Philippine National Conservatory of Music (PNCM), a graduate school that hones the country’s world-class singers, she must join a show choir and win the next national competition in order to stay at the PNCM – a deal she made with her father, Jeff (Lito Pimentel). Jeff wants Lyric to get a more stable job to help the family financially than to pursue an uncertain future as a singer, but was convinced by Lyric to let her join the PNCM through their deal.

As Lyric navigates PNCM, she encounters different students who also want to fulfill their wildest dreams. There’s Beat (Seth), an introverted newbie who developed stage fright from his mother’s death, but overcomes it through Lyric’s influence. Beat also has a secret crush on Lyric.

Lyric also crosses paths with Grae (Kyle), the leader of the School for Modern Pop, the PNCM’s rival school; Melissa (Sheena), Jazz’s sister who is also one of the school’s top singers, but is the school’s resident villain; Stevie (Jeremy G), an active church member who stutters but regains his confidence when he sings; Virlyn (Angela), a talented performer who can play any musical instrument; and Unique (Awra), an artist who was rejected by the Prime Belters due to her gender identity.

Get to know Lyric, Beat, Jazz, Cadence, Grae, Melissa, Stevie, Virlyn and Unique as they compete in choir competitions and follow their dreams by streaming “Lyric and Beat” for free on iWantTFC in the Philippines and Indonesia. . The show will also be available for premium users in other countries from August 10.