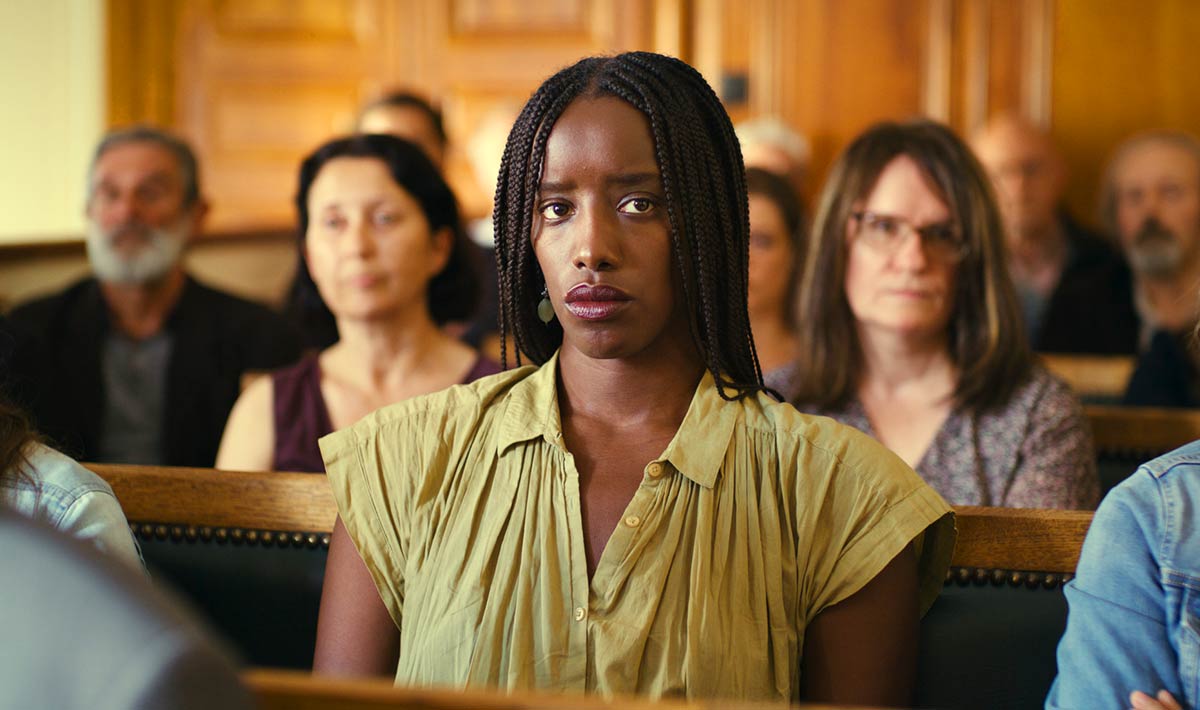 On the inhospitable shores of Berck-sur-Mer, France, where the sounds of the tide mingle with the breathless running of a woman, is where Alice Diopthe first narrative feature of “Saint Omer‘ begins. It’s a taught, spellbinding legal proceeding, where the glitz, where the performance of the space, and the cold, calculating way it exposes the most vulnerable, drags us to an inevitable but no less dizzying end.

‘Saint Omer’, with devastating intent, recalls the real-life incident in 2013 involving Fabienne Kabou leaving her 15-month-old baby girl on a beach in Berck-sur-Mer, where her child drowned in the rising tide. In Diop’s assured account, Kabou is renamed Laurence Coly (Guslagia Malanda), a woman who originally emigrated from her native Senegal to France to study law. Coly’s trial is seen through the methodical eyes of Rama (Kayije Kagame), a professor whose undercurrents will crash with this case with an intensity she cannot foresee. Wanting to make this trial the centerpiece of his next project, Rama travels to the white, oppressive town of Saint Omer, intent on finding a story. There she rediscovers the ghosts of her past and her fears for the future.

Diop’s “Saint Omer” doesn’t condescend to the viewer by creeping into black-and-white offerings of good and evil, or sweeping statements about race or gender. This story ripped from the headlines accomplishes a much more creative and a little less forced feat. He dances on the surface of these participants, and in their subtle undulations, to reveal the humanity in what seems inhuman.

Similar to Joe Marcantoniothe horror movie”Kinshipin “Saint Omer”, Diop meditates on immigration, mysticism, darkness and motherhood. These themes take shape through the eyes of Rama, an academic who is pregnant with her first child and is already sifting through the anxieties pregnancy can bring. When she leaves the station of the small northern town, her anxieties are exacerbated. She feels the brilliance of the white inhabitants, of their burning thoughts. In most modern film noir, this elegant tracking shot would succumb to serving as a launching pad for overbearing horror tropes. But Diop shows the kind of restraint inherent in a documentary filmmaker who has better rely on suggestion to allow the story to unfold organically.

You get the impression, very early on, that this story had the potential to be a documentary. Diop attended Kabou’s real trial. But there’s a thematic depth here, nestled in Rama’s inner, inner feelings, that this film breathes life into that a documentary couldn’t. When Coly, for example, walks into the courtroom, the conscious lens notes her shackles, how dog-like she must be pulled, and the immediate dehumanization of her this causes. Rama tries to watch without prejudice, but you can see his unease, very briefly, rising to the surface. It’s one of the incredible ways Kagame commands the setting – both visually and physically – with barely a line of dialogue.

In fact, we go long periods without seeing her on screen. It often occupies the background of the composition. It’s a ghostly presence in a trial primarily about a ghost. The only times we hear of Rama are away from the rigid enclosure of the courtroom, in her hotel room, when she listens to her audio recordings of the trial. There, the memories of his difficult childhood with his mother come back. It is also there that she reflects on the thesis of her project, which consists of combining the events of the trial in the Greek tragedy, Medea. It’s a myth about a mother who murders her sons in revenge for her unfaithful husband. And it’s about madness and heartbreak, and a foreign woman feeling trapped in a foreign land that treats her like a foreigner.

Although this burden is felt by Rama, it is built into Coly, especially in the conventions of the trial. The judge can ask just about any question he wants. Lawyers can make long speeches that boil down to “I have more of a comment than a question”. Meanwhile, Coly must stand to attention in the dressing room throughout the proceedings as she waits to be slandered, to be ogled, to be fired. Court rituals create an exotic air – which shines through in the bold cinematography of Claire Mathon (“spencer” and “Portrait of a lady on fire”) – where the goal is to retraumatize rather than find the center of truth. Editing throughout the film by Amrita David is in no rush and Diop trusts her audience, even though the audience may not trust Coly, especially when she claims an evil eye led her to commit murder. Malanda plays Coly as hard to read in a haunting performance where emotions are muted but seismic.

Everyone is trying to figure out why Coly did what she did. Did an evil eye really push Coly to commit such an unthinkable act? If not, how do we judge Coly? Should we judge her at all? And does she deserve empathy? Diop directs a film that provides few answers. But the lack of answers is not a problem. It is an empathetic characteristic, where the results of racism arise in a tangled way. Where to lose your home is to lose yourself. And where motherhood becomes a line of passage between the pains of each generation.

If there is a fault with “Saint Omer”, the fault lies in the sound narration. The score, composed of undulating voices, which has become the new shorthand for African mysticism, rarely matches the tenor of the events on screen and sounds unoriginal in its tonality. And yet, one last drop of nina simone‘s”little blue girlpierces the heart. While filmmakers often use Simone’s music to do the heavy lifting of emotional work – a now obsolete and lazy tactic – the use makes perfect sense here, as Simone, a black woman who also emigrated to France and struggled against sanity and motherhood, is the musical figure of these women, with a needle drop effortlessly bringing together all the thematic tangents.

And, in the film’s slippery, cathartic conclusion, when a closing argument lets all the masks fall, Diop makes that connection clear: how stories and memories can collide to heal. “Saint Omer”, a captivating and moving work brimming with sweet sympathy, begins with a woman running in the dark. It ends with her being embraced in the light. [A-]

Follow all our coverage of the 2022 Toronto International Film Festival.