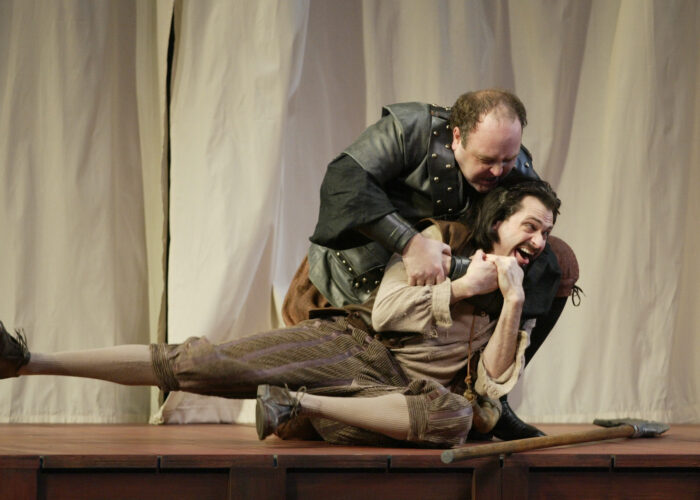 ‘Astonishment, horror and joy’: Bay Area students tell the drama on and off stage

Everyone loves a stand-in story – when the backstage drama rivals and perhaps intensifies what’s on stage, when the art form reveals how the sausage is made, when routine evaporates and every gesture , look and line crackles with danger and life.

This winter, as the omicron variant forces the industry to rely on one-liners like never before, The Chronicle has reached out to Bay Area artists (or those with local ties) for their favorite one-liner memorabilia of all. the temperature. Here are a few, including one where actor Vinh G. Nguyen double-dubbed on two different shows in one day:

“I had a dream where I had to leave at the last minute. It was terrifying, and in the dream there was a problem getting me to fit into the costume. I woke up before I had to deliver any lines. I realized it was just a dream. Then I realized it was June. The show had been running the previous December and had been shut down for six months. Studying is an exercise of anxiety!

“At the end of the first act, Shakespeare has a magnificent speech where he suddenly shows his incredible poetic side for the first time, impressing the hell of the Earl of Oxford, played by Marco Barricelli. During my first performance, I completely crossed out that speech. Like, here we go. I have no idea what I said, but that wasn’t what (playwright) Amy Freed wrote, and it certainly wasn’t poetic.

I will always remember the look Marco – who I adored and really wanted to impress – gave me when he said his line in response. The line was ‘It’s not bad.’ And it was so bad. It was so, so bad. Marco’s look was a beautiful combination of amazement, horror and joy. He almost winked at me.

Understudy role: Maria in “Lend Me a Tenor” from the Fairfield Civic Theatre, 2013

“I played Maria in ‘Lend Me a Tenor’ originally with Ross Valley Players in the fall of 2012. Then in late January the now defunct Fairfield Civic Theater was about to open its own production when their Maria had a very bad case of the flu. during the technical week. IIt hadn’t been that long since I had played the role, so the lines definitely came back quickly.

I think every actor has that period after a show is over and you had a space where you sit down and think about all the things you would have done differently with the character, if you could do it all over again. And it was an opportunity for me to make some of those adjustments! »

“As soon as the actors arrived for Berkeley rehearsals, I was warned that I was potentially going to go on for almost an entire week of performances.

I immediately drove down from Sacramento, learned the lines and blocking in (manager) Michael Suenkel’s office, and was thrown on stage after watching a race. It was the fastest I think my brain had ever worked: trying to synthesize everything I saw and converting the actor’s choices into my versions of the same moments, doing complex blocking and – oh, yeah – saying things. I was terrified and electrified.

Apparently they liked what I did because it led to a great relationship with Berkeley Rep and several other roles, including Louis Ironson in “Angels in America”, an experience that will probably live on in the most special corner of my heart for the rest of my life. And it all really “started” with my luck as an understudy.

Understudy role: Characters in Shotgun Players’ “The Death of Meyerhold”, 2004

“I wrote and directed but didn’t act – until one night an actor fell ill, and the next night on 30 minutes’ notice I continued. Poignant.

With 80 characters for the cast of 12 to play, and stage changes also driven by the actors, the offstage show was as tightly choreographed as the onstage show. The moments of “pause” were rare. I have memories of actors standing backstage, beautifully lit by the ambient stage light, closing their eyes for a few precious seconds of meditation before launching into the action. I already admired this cast for the depth of commitment and enthusiasm they brought to this play (but) seeing their “show” behind the scenes up close, and especially the different ways they helped to fit me into it on the fly, to keep me and the piece on track, only increased my appreciation for what they had accomplished.

The next night when the actor returned, I’ve never been happier to see another human being in my life!”

“One Saturday in particular, I did two performances for ‘Gold’ in the morning and in the afternoon. One of the actors knew he was going to be absent. I did my homework, walked in and they did a rehearsal, which was good.

I drove to “Flower Drum” and we knew that one of my cast mates had already been injured during the performance, but we didn’t know how bad it was until the next day. I received a call. I ended up covering it, with my track. Luckily, my other track didn’t need to be on stage for the scenes in the book, so I picked it up real quick and jumped on it. It was crazy, crazy, crazy.

As humans, we are so adaptable. I think we give ourselves less credit than we deserve. As a director, one of the things I’m very proud of is that I’m very decisive. I can make a decision on the spot and support my artistic decision and articulate it very clearly. I think part of that had to do with my acting background and the times I was acting and having to head over and see what the best course of action is that will benefit the show and the situation in its together.

“My fiancé and I were having a party to watch football. The 49ers were playing the Seattle Seahawks. We had a bunch of people showing up at our house at 5 p.m. Around 5:15 p.m. nothing to drink. I looked at my watch and said, “I have to wait until 6:35 for a 7 o’clock show, just in case something happens. I swear, my phone rang when I finished that sentence. I saw the name on the phone, and it was Michael Suenkel. Michael said, “I would really like to make that call in a few weeks.”

Most of the time, I wear a necklace around my neck with a charm that says “Believe”, a penguin charm, and then the third charm is an infinity symbol with my mother’s ashes. I took it off and put it in my place in front of the mirror. “Becky Nurse” was so magical. It was a bit like tapping into my mother and my ancestors and their power to help give me a little something extra. I even remember thinking of Pamela (Reed, the main actor) a few blocks away. She had said something about being the channel for the role to speak through her. It was almost like I was like, ‘OK, Pamela, if you could direct some energy a few blocks down this way so I could be the channel tonight?’

During the first monologue, there was a moment in the middle where I finished a sentence, and I had no idea what was coming next. I inhaled. A thought came to me. I knew it wasn’t the next line, but it popped into my head and I continued.

Afterwards, I had so much adrenaline going through me. I felt like I was up until 4am. I wanted to do it again.

Understudy role: The Baker’s Wife in Berkeley Playhouse’s ‘Into the Woods’, 2021

“Thursday, around 5 p.m., we made the last call. It started my clock. I stepped down from all of my GM duties and had about 26, 27 hours before the curtain.

I have a background in interpretation – I went to school for it – but it had been 20 years. It’s a great role, and it’s Sondheim. With the timing of his death, for me, there was an element of really wanting to honor that work. As a member of the theater staff, there is also a piece of “I still have to report to work on Monday”.

I was already off the book. It was basically like auditing a class. I had attended many rehearsals, but I was not up. It was like reading and memorizing an entire manual on how to ride a bike without ever having hopped on a bike.

I had to make this choice to trust, and it paid off in this really human way, especially after spending a few years where we were separated from each other.

Every time I walked backstage with the other cast members, it felt like the craziest pep rally of my life. I felt like I was crowd surfing throughout the show.

The challenge and joy of theater is really a practice where people collectively come together and make it happen. As CEO, I look at rights and royalties, contact lists and budgets. But having the honor of embodying what I usually direct was such a gift.