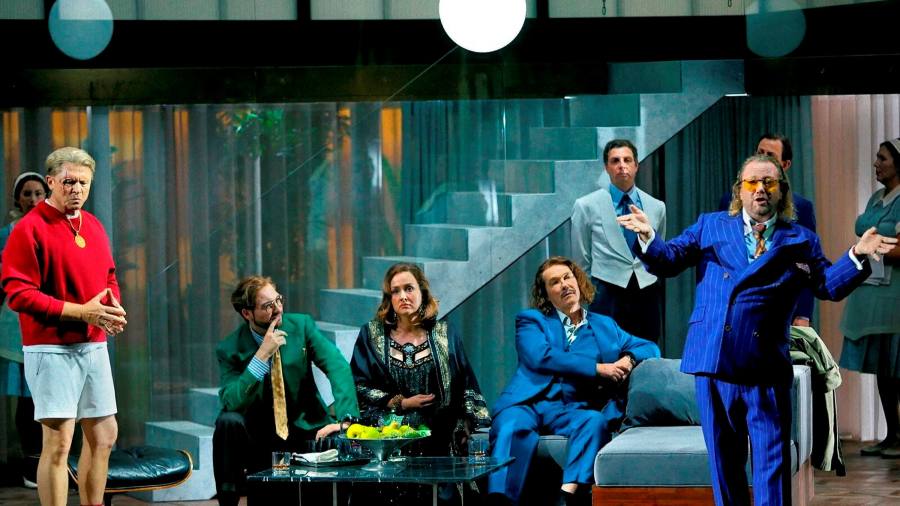 Although Bayreuth had a brief golden age in the 18th century, it was a backwater when Richard Wagner launched his opera festival there in 1876. Today, it makes headlines every year, from especially since Angela Merkel was a regular visitor during her chancellorship (she attended the opening night again this year).

Wagner would have liked the attention and might even have approved of the climate protesters who showed up to demonstrate. He was deeply interested in politics and once sent an article to Bismarck to interest the statesman in his festival plans. He was upset that there had been no response.

The operas themselves are deeply rooted in Wagner’s often controversial social and political beliefs. As George Bernard Shaw said in a quote printed in this year’s program, “The Ring, with all its gods , giants and dwarfs . . . is a drama of today, and not of a distant and fabulous antiquity. The challenge for a director is how to stage this.

This year’s new production The Ring of the Nibelungs, Wagner’s largest four-night work, is listed as the 16th in the festival’s history, with recent years seeing a sharp decline. Director Valentin Schwarz, still only 33, announced his intentions in advance: “Wagner is my Netflix,” he said, and his Ring offers to show us the box set of a dynastic saga involving a dysfunctional and modern family.

The idea isn’t implausible at all (Wagner’s own warring family and descendants might not be a bad place to start). We enter a world of bling, where Valhalla is a gleaming, modern mansion and the Valkyries gather in a glitzy beauty salon. The head of the family is Wotan, an aging playboy who stays in shape by doing his weights, but he’s over-budgeted for a towering glass extension to his house. The family members, satisfied with themselves, wait for him to solve the problem.

There’s a satisfying sleazy vibe to these family scenes, but not a whole lot of logic. One features Freia’s funeral, but when did she die? Another shows the death of Fafner, one of the unpaid architects now languishing in end-of-life care in the living room, but why did the family take him in? How can Sieglinde be eight months pregnant when the curtain goes up? Die Walküre when Siegmund hasn’t met her yet? What good is Wotan not killing Hunding, when we’ll never see him again? Some of these questions are answered in the director’s podcasts, but here’s another: why should we listen to them to understand his production?

There is also more to Ring than human history alone. Wagner’s libretto works on many levels, and its mythological symbols are key elements that hold its larger meanings together. The challenge for a director who has chosen a soap opera setting is to make sense of them.

Schwarz has weak solutions for some and fails others. No rainbow bridge, no sword for Siegmund, no magic fire for Brünnhilde, no Tarnhelm (the scene in Nibelheim where Alberich undergoes transformations is painfully underdone). The ring itself becomes a boy in a gold shirt, symbol of a new generation of hope, who is abducted by Alberich and turned to the dark side, growing up to be the evil Hagen – again an interesting idea which never fully realizes its potential. The big final scene descends into a black hole of ideas.

How much easier it is to knock out those director puzzles and focus on the music. Even this, however, had its challenges, as Covid and other endemic issues led to several singers taking on roles in operas, including three Wotans, two Siegfrieds and two Brünnhildes.

The two central operas are doing the best. Die Walküre could hardly fail when the curtain went up on huge-voiced Lise Davidsen as Sieglinde and youthful-cool Siegmund as Klaus Florian Vogt, a pair as beautiful as Bayreuth can have seen. The two were pursued by Georg Zeppenfeld’s firm-voiced Hunding. Wotan in this opera was Tomasz Konieczny, whose muscular bass-baritone did well in act two until he fell through a chair and was replaced in act three by the expressive and tender Michael Kupfer. -Radecky.

Siegfried was dominated by Andreas Schager in the title role, crystal clear, never tense and almost as fresh at the end of this incredibly taxing role as he was at the start. He is the Siegfried of his generation. His reward was the young and lyrical Brünnhilde by Daniela Köhler, a promising find. Konieczny returned, seemingly recovered, as a hard-hitting wanderer, facing the fearsomely aggressive Alberich of Olafur Sigurdarson, another of the hits of this cycle.

It was a musical performance that kept the audience captivated by the narrative, exactly what the production lacked.

There were a few positives elsewhere. Christa Mayer’s Fricka exuded relaxed authority. Arnold Bezuyen played Mime, oddly portrayed as a toy collector, without exaggeration and Albert Dohmen sang an almost noble Hagen. Erda by Okka von der Damerau, one of Wotan’s former lovers also settled in the family circle, brought seriousness to his remarks. More disappointing was Iréne Theorin’s Brünnhilde in Die Walküre and Götterdammerung, too garish with a persistent rapid vibrato. Among the others, Egils Silins, like Wotan in Das Rheingoldand Clay Hilley, as the last-minute Siegfried in Götterdammerungkept the show on the road.

Not the least of the cast’s replacements was conductor Cornelius Meister, who took over a few weeks before opening night. This is a wide and forward brushstroke Wagner and it was possible to overlook what was lacking in insight and expression whenever the blood of the music was in place, like the white-hot forging of Nothung or the passion of the dawn duo.

It was a musical performance that kept the audience captivated by the narrative, exactly what the production lacked. We were promised we’d be hooked on Wagner TV, down to the minute, prime time, but by the time Schwarz finished weaving the story, we were left with half-understandable confusion. Netflix might like to speak to him before making any further comparisons.

2022-08-09
Previous Post: ‘Crimes of the Future’ producer Robert Lantos explains how epic drama series ‘Rise of the Raven’ will raise the bar for Hungary (EXCLUSIVE)
Next Post: Sigourney Weaver and Kevin Kline star in romance drama ‘The Good House’