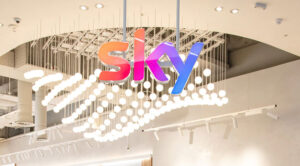 “M depicts – for the first time from within – the rise of the fascist dictatorship and the sinister power of dictator Benito Mussolini. A theme of tragic relevance. I am happy that a series extends the literary project. We need stories that ignite the passion for freedom. The struggle between democracy and dictatorship is not over”.

Mr. Son of the Century is a bold and historic new Sky Original drama series based on the international bestselling novel by Premio Strega winner Antonio Scurati, which chronicles the birth of fascism in Italy and the rise to power of Duce Benito Mussolini.

Sky Studios’ eight-part series, produced by Lorenzo Mieli for The Apartment Pictures, a Fremantle Company, in collaboration with Pathé, will cover the creation of Italian booklet in 1919 until Mussolini’s infamous speech in parliament following the assassination of socialist deputy Giacomo Matteotti in 1925.

The series will also offer viewers insight into Mussolini and his personal relationships, including his wife Rachele, his lover Margherita Sarfatti and other iconic figures of the time. Like the novel, the series will tell the story of a country that surrendered to dictatorship and the story of a man who has risen from the ashes time and time again.

The drama is written by Stefano Bises in collaboration with Davide Serino. The series will chronicle events with historical accuracy, with every event, character, dialogue, and speech documented or attested to by multiple sources.

Filming will begin in 2023 and the series is set to air on Sky and the NOW streaming service in all Sky markets across Europe. Fremantle will handle international sales. Since its first publication by Bompiani in 2018, Scurati’s novel ‘M. Son of the Century’ has been translated for publication in 46 countries, has sold over 600,000 copies worldwide, won the Premio Strega, Italy’s most prestigious literary award, and is published today. by HarperCollins in the United States.

“Making this series today has great value. In recent years, we have witnessed the birth of new forms of populism, sovereignty and authoritarianism. The footsteps of the man who marched on Rome ago a hundred years are found in many figures of the times we live in. All the more so now that Europe has once again become a theater of war. “M” tells of the perverse mechanisms of empathy and violence, manipulation and modernity that swept Italy a century ago.

“And soon after, the world. It is an extraordinarily contemporary tale, but also a journey into the inordinate ambitions, capacities of seduction, relationships and fears of a man who made a large part of the Italian people fall in love with him and then dragged him into an abyss. In which, at the end, he himself found death.