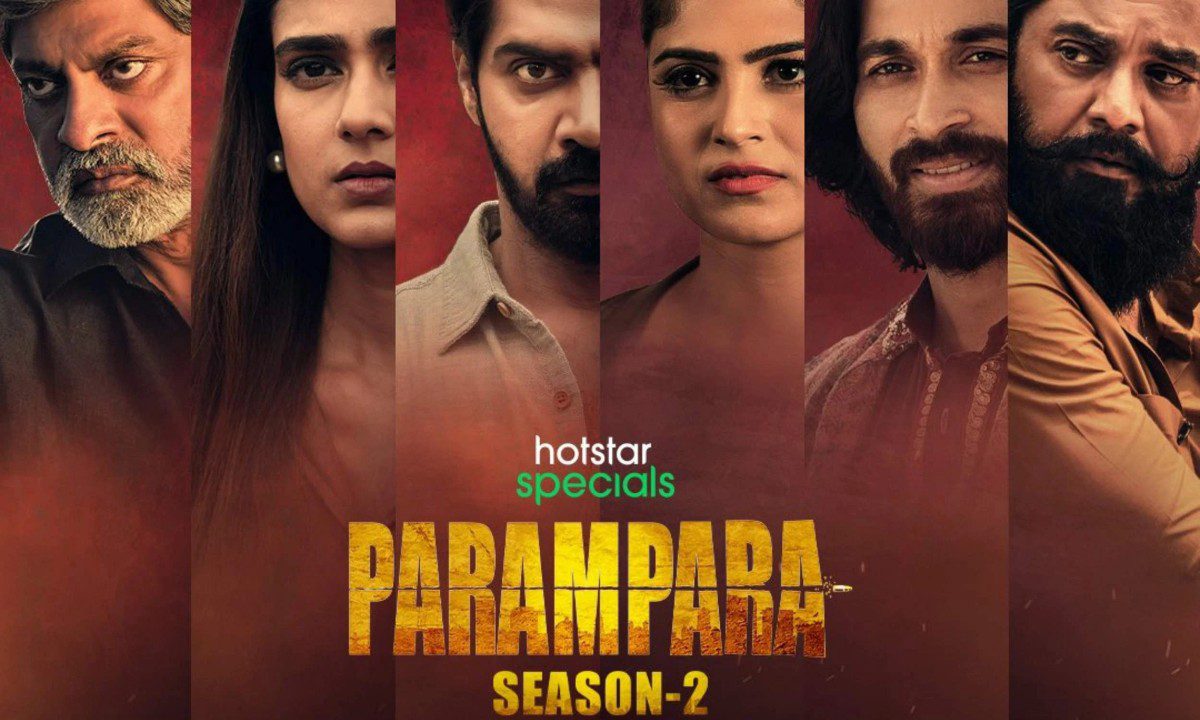 Parampara Season 2 is a sequel to the Telugu-language crime drama series released on Disney+ Hotstar on July 21, 2022. It is directed by Krishna Vijay L., Viswanath Arigela and Hari Yelleti, who also wrote the screenplay. There are 5 episodes in total with a running time of around 35-37 minutes.

The synopsis for the series from Disney+ Hotstar reads:

The power struggle escalates as Gopi returns with bigger and smarter moves to prevail against Naidu. Will Gopi’s ruthless uncle finally get his reward?

Return of Gopi with bigger weapons

The series picks up where it left us last season where Gopi attempted to kill Naidu at Rachna & Suresh’s wedding. Also this time episodes means what will be the plot of each episode. Episode 1 is titled Gamanam which means movement or progress, the next episodes are Kriya (action), Sthaanam, Chathurangam (army) and Moolyam (prize).

Read also : Planning to watch Parampara Season 2? Here’s a recap of everything that happened in Season 1

Gopi is then sentenced to 3 years in prison for using an unlicensed weapon and creating a ruckus, has trouble adjusting to prison life, and often gets into fights with prison guards and even other inmates. He is in turmoil where on one hand he blames Rachna for marrying Suresh and on the other hand he blames himself for cheating on a nice person like her.

But even life in prison is no different from the outside, where the one with the power dominates the other. Gopi takes a stand against the workshop manager who extorted half of the prisoners’ wages. By going after him, he gains the trust of a powerful man named Ratnakar who offers him a good position and bail in exchange for Gopi’s services.

When Gopi gets out of jail, the real game begins, where he tries to win over Naidu every step of the way. Whether it’s big business or an upcoming election, he always tries to outdo it and stay ahead of the game. But can he succeed or find himself trapped in Naidu’s web? Honestly, at the end of Parapara season 1when Gopi said the game has just started, I had high hopes.

I thought maybe next season would show us that Gopi is a bigger mastermind than we all know and has tricked us all. But no, he’s just a man blinded by rage for revenge and fueled by his uncontrollable anger. Of course, he triumphs over Naidu many times, but he has no strategy or plan to take power.

Read also : Indian predator The butcher of Delhi: who was the serial killer and did he get caught?

Luckily, the episodes don’t last more than 50 minutes this time around, as there’s not much to show or keep viewers engaged. But even the 35-minute episodes feel like a drag. The characters keep talking and talking about what they’re going to do and what’s going to happen to the person in front of them, but it doesn’t turn into equally exciting action.

It’s like a daily soap opera that’s been going on for years and just tries to stretch out the scenes with unnecessary slow-motion scenes and long pauses after each sentence to match the running time. Gopi says he does everything for his father, but it seems he is just hiding his power ambitions behind it.

He claims that his father would be the best leader who would work for the welfare of the people, but when Gopi has that kind of power, he is no different from Naidu and does the same things. How is it different then? Rather, he should have devised a strategy to win Naidu’s trust and prepared everything for him.

Final Thoughts: Stream it or Skip it?

Parampara Season 2 on Disney+ Hotstar is a jump if you weren’t eager to watch to find out what happened after Gopi was arrested. The sequel doesn’t add anything else to the series, which should have only been included in the first season. I think the whole series should have been finished in 10 episodes without another season.

We learn more about Rachna’s parents and the reason for their death, but the story is still incomplete, as there was no resolution between Gopi and his relationship. I guess the creator intends to tell the story in small parts across many seasons.

Parampara Season 2 is streaming on StarDisney+.