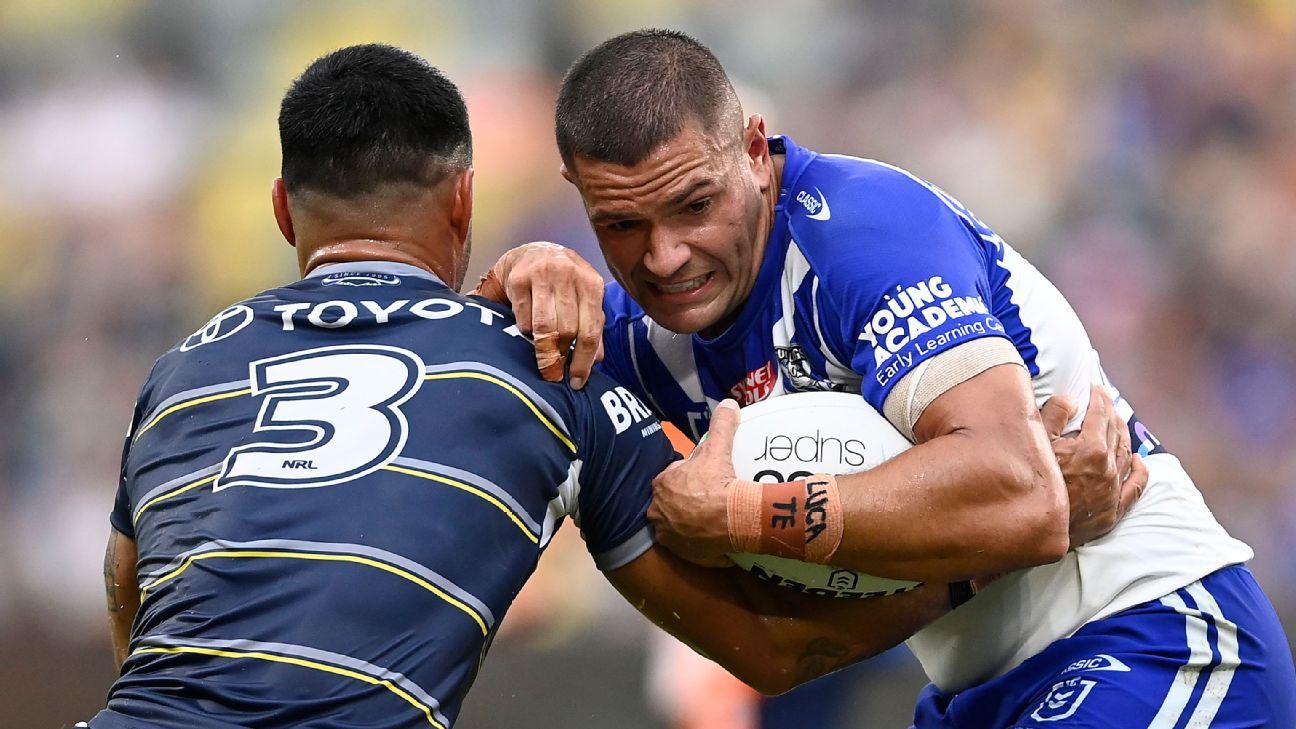 Canterbury overcame the odds to steal victory over North Queensland, beating the Cowboys 6-4 in a scrappy, error-strewn game all the way NRL game in Townsville.

Trent Barrett’s side turned the script on a lackluster 40-minute opener to score the only try of the second half through Jayden Okunbor, who benefited from Jeremy Marshall-King’s clipped pass that was beaten by Braidon Burns to score in the corner. in the 51st minute.

The Cowboys thought they had snatched victory from the jaws of defeat with three minutes to go when Coen Hess came on a high ball that found Hamiso Tabuai-Fidow, who skidded to slide under the posts in torrential rain.

But the bunker official spotted the Cowboys fullback ahead of kicker Chad Townsend, with the Bulldogs holding on in the closing stages for a win to kick off their 2022 campaign.

After a disappointing three-win season last year, Barrett said his team’s victory was very special after losing players to concussion protocols throughout the contest.

“It’s always a tough trip coming to Townsville, but to get through what we had – we had five HIAs and were running out of reserve, some guys were playing out of position and using our 18th man,” he said.

“To be able to hang on and get the win is great for us, great for the players and I’m extremely proud of them.”

Playing in his first NRL game for the Bulldogs, star rookie Josh Addo-Carr said the win was special not just for himself but for their dedicated fans.

“Since I came to the club they (the fans) have gone above and beyond for me and my family and all the boys in the team,” he told AAP.

“It was a crazy win, it was one of the toughest games I’ve played in terms of conditions…and a special win for ourselves, our members and our fans.”

In a battle between the final two teams of the 2021 season, the Cowboys took a four-point lead into the main break after Tom Gilbert’s first NRL try in the 16th minute.

Tom Dearden exploited a three-on-two shortside in his own half after Valentine Holmes’ quick ball play, feigning before finding Murray Taulagi who sent Gilbert into a dive.

That play ended up being North Queensland’s only highlight in the contest, failing to crack the Bulldogs as fans braved torrential rain.

But Dearden, Gilbert and youngster Jeremiah Nanai drew praise from coach Todd Payten for their efforts, in another game the coach said they cost each other.

“The advantage he (Nanai) has is huge,” Payten said after the loss. “It was also his first race of the season, so to go 80 minutes like he did is really encouraging.

“Tommy Gilbert was strong for us, he played between edge and middle and his effort and work ethic are positive.

“We showed periods where we hung on but I didn’t feel like we were beaten in any way, it was a game we cost ourselves.”