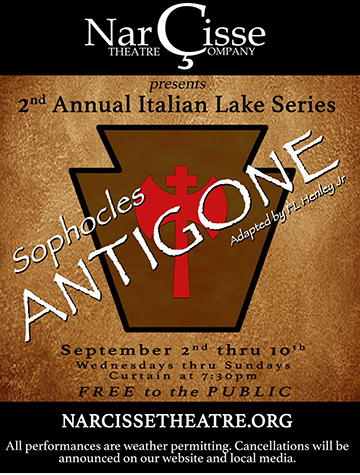 The Narcissus Theater launches its old school theatrical season (read: ancient school) with a classic tragic play by Sophocles around 441 BC.

The story of “Antigone,” adapted by artistic director FL Henley, Jr., is an open commentary on contemporary politics, a political manifesto inviting theatergoers to vote.

I won’t lie. The play drove me crazy. Confused. Pained in places.

And that’s exactly what the room is designed for.

With a play as old as “Antigone”, its themes are as relevant today as they were 2,400 years ago: absolute power corrupting absolutely, the danger of pride defended above all other values, laws of man versus laws of God (or gods), and ethical issues in dealing with unjust laws.

While Sophocles wrote his characters about the issues of his time, and even threw down a scourge for good measure, viewers from centuries past can easily recall their own examples of unjust laws, tyrannical rulers, and “what would you ?” ethical situations. (As a Catholic school veteran and functional member of a dysfunctional family, the allegorical lines don’t even have to be political.)

Speaking of dysfunctional families, we find our tragic anti-heroes in the aftermath of a civil war. Do you remember Oedipus from Freud’s theory? This piece is about his children, who are also technically his nephews and nieces. Although Oedipus’ daughter, Antigone (Erika Eberly), recognizes that her grafted family tree is part of her internal struggle, her determination to properly bury her brother Polynices is more pressing, and she wants her sister Ismene (Caitlyn Davis) ugly.

The new ruler, Kreon (Marc Lubbers), has proclaimed Polynices a traitor, that he must remain unburied and unmourned. As Antigone is about to marry Kreon’s son, Haemon (Stiles Everett), conflict builds. Even Kreon senators (Joel Colvin, Chris Krahulec, James Mitchell, Adam Bateman, Sara Foster, Sarah Vermeulen, Caitlyn Davis, Daniel Hutchins and Stiles Everett) and Kreon’s own wife Eurydice (also Chris Krahulec) point out that the law is unfair, and seems to be aimed at Antigone.

Eberly and Lubbers stand out in the impassioned interpretation of the characters, with well-timed, red-faced, sputtering delivery of lines. Equal and motivated by their contradictory beliefs, neither backs down from the other, feeding on the passionate dynamics of the other.

Following the main conflict, the soap opera style of the play then gives way to more restricted roles. Davis plays Ismene as a hesitant and scared woman firmly determined to play by the rules, even if they are unfair. Stiles also finds himself among the big dramas, though they flaunt their fury through the character development process, a volcano erupting at the right time.

Although Narcisse’s “Antigone” is deliberately timed with the upcoming elections in November, it seems the political platform through theater has more squarely saturated year-round plays that were previously just entertainment. , to the point that viewers receive an almost constant stream. political agendas of artists. Henley isn’t trying to be sneaky about it, or even slightly subtle. It’s on your lap (ie in the platform), telling you who not to vote for and why.

You can get upset like I did, for any combination of character actions or inactions, your personal political stances on any point on the spectrum, or a triggered memory of a movie director. elementary school that looked forward to filling your young life with rules that still have no earthly or heavenly meaning. The thing is, there are no easy fixes in “Antigone” surface themes. I guess what’s hard to do is look at this piece and feel some semblance of contentment.

“Antigone” fulfills Henley’s promise of all Narcissus productions: “There is no happy ending. We want you to come away with uncomfortable questions. We don’t put a bow on it for you.

“Antigone” takes place on September 2, 3, 4, 7, 8, 9 and 10 at Italian Lake Park, with shows starting at 7:30 p.m. Admission is free, with a suggested donation. Benches are available and you can bring your own lawn chair. (Also bring insect repellent.) For more information, go to www.narcissetheatre.org and on Facebook.

If you like what we do, support our work. Become a friend of TheBurg!