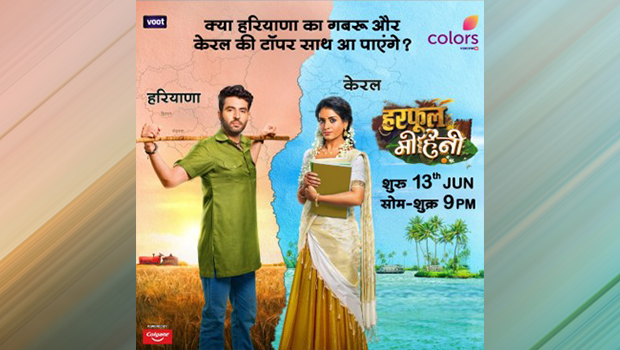 The show is about whether love can bridge the gap between two distinct cultures. While they come from different backgrounds and ideologies, can Harphoul and Mohini find love after being bound by the institution of marriage? Actors Shagun Sharma and Zebby Singhh will try out for the lead roles of Mohini and Harphoul respectively.

Produced by Cockcrow Pictures and Shaika Entertainment, “Harphoul Mohini” will premiere June 13 at 9 p.m. and air Monday through Friday, only on Colors.

Manisha Sharma, Content Director, Hindi Mass Entertainment, Viacom18 said, “Harphoul Mohini is an unusual romantic drama featuring diverse cultures and characters. While Harphoul has a conservative outlook, he marries a free-spirited girl from Kerala. It shows how love has the power to transcend all differences through the story of two people with contrasting origins and beliefs. It is a great pleasure for us to collaborate with Cockcrow Pictures and Shaika Entertainment for another exciting new venture and we look forward to a great partnership.

‘Haryana ka Jaat’ Harphoul Chaudhari is a tall and handsome extrovert, who wears his heart on his sleeves but has a conservative mindset. On the other hand, ‘Kerala ki Penkutty’ Mohini Vijayan is a simple and educated girl with a progressive outlook on life. As their lives intertwine and fate brings them together through an arranged marriage, how they navigate their separate cultures and ideologies while sharing a bittersweet relationship will form the premise of the show.

Will Harphoul from North and Mohini from South be able to adapt to each other’s way of life and build a life together?

Producers Rajesh Ram Singh and Pradeep Kumar said, “Our partnership with Colors goes a long way and after the success of ‘Choti Sarrdaarni’, we are delighted to team up for another wonderful project, ‘Harphoul Mohini’. The show is filled with a myriad of emotions and has a beautiful mix of diverse cultures. The producers added, “’Harphoul Mohini’ is a gripping love story between two people, Harphoul and Mohini, who are like different pieces of the same puzzle. There’s romance, humor, drama, and plenty of bittersweet moments. As makers, we consider it our responsibility to raise certain issues that remain unspoken in our society and to make our humble contribution to bring about positive change. I hope our audience will support our new show and join us on this new journey.

Before trying Harphoul, Zebby Singhh said, “It’s my first outing with Colors, and I’m both excited and nervous. Harphoul is a proud Haryanvi man who is deeply rooted in his culture and traditions. When Mohini comes into her life, it takes an interesting turn leading to a beautiful love story. I hope viewers enjoy Harphoul and Mohini’s chemistry and shower us with immense love.

Describing the role of Mohini, Shagun Sharma said, “My Mohini character in the show is a simple Kerala girl who is educated and strongly opinionated. As she marries Harphoul who is her complete opposite, a beautiful tale assures viewers will love and adore her. I thank Colors for trusting me in this role and I am very happy to bring Mohini to life.

“Harphoul Mohini” boasts of having an ensemble cast with Supriya Shukla, Tej Sapru and Pankaj Vishnu among others.

On the digital front, social media is widely used to give internet users a taste of what “Harphoul Mohini” has in store for them. Tapping into the current wedding video trend, a parody wedding video of Harphoul and Mohini has been released with contrasting visuals.

The channel also teamed up with Curly Tales’ Kamiya Jani and YouTuber Mayur Jumani to introduce the characters and other notable influencers to create reels to the show’s title track. Specialized animated messages are also being created for a segment called “Tiny Colors Tales”.