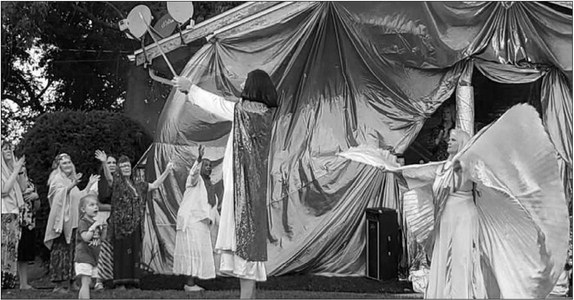 The “Crucifixion and Resurrection of Jesus,” performed Aug. 6 and 7 outside Reverend Jeanette Pack’s exterior converted home, was well received by the audience of 50 each night. Written and narrated by Reverend Jeanette, attendees were a combination of community members and friends from as far away as Branson, Mo.

The Risen Lord Jesus, played by Branson’s Levi Silkwood, wore more than one hat, like many in the production. Levi arrived a few days early to work on the outdoor set with local volunteers. Levi’s history with ministry work began at age 8 when he was cast as a member of a Drama Pack.

No voluntary offerings were taken or suggested; the event was free to reach people for Christ.

Eighty-one-year-old Reverend Jeanette Pack, widow of Reverend Aaron Pack, although she can no longer travel, has decided to continue her ministry work of over 60 years – 45 of those years involving drama which she wrote and presented in seven different states. Pack says she has been blessed with the help of family and friends to continue serving. The author of 10 dramas, she looks forward to providing future dramatizations for the Marshall community.