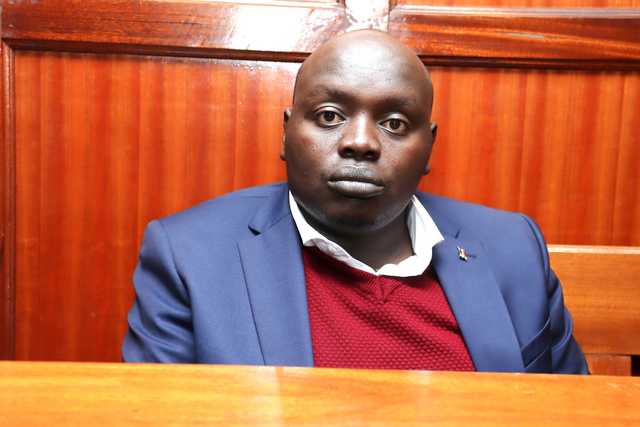 In the Kalenjin dialect, the name Cherargei loosely translates to someone who does things their own way.

The kind of ‘sipangwingwi‘popular culture among most young Kenyans has recently been taken over by politicians in their campaigns.

And just like his name, Senator Nandi Samson Kiprotich Cherargei might have thought he was free to do whatever he wanted when he appeared in a Nairobi court on Monday to hear a case in which he is accused of hate speech.

He was wrong because courts have rules and procedures that parties must follow, regardless of their status. The young legislature found it difficult and no matter the tantrums he threw in court, Milimani Chief Magistrate Wendy Kagendo stood firm and was determined to hear the case.

The 33-year-old senator faces charges of ethnic contempt contrary to the National Cohesion and Integration Act for remarks he allegedly made at a public reception in Nandi in 2019.

The first-term senator was arrested and questioned in August 2019 over statements he made at a funeral in Lelwak, Nandi County, warning opponents of Vice President William Ruto that they will be dealt with.

The case was brought to trial on Monday and was not ready to proceed with the trial, Mr Cherargei caused drama in court in a bid to stall the hearing.

At first, the lawmaker showed up alone in the courtroom and begged the magistrate to adjourn the case, saying his lawyer was appearing in another court.

The magistrate put the file aside for a moment to allow Mr. Cherargei to obtain his lawyer. When the case was called for the second time, the legislator made the same claims.

She was not amused and asked the first witness to come into the witness box and testify.

Wycliffe Mwatu, an investigator attached to National Cohesion and Inquiry, gave evidence and when he finished giving evidence the court asked Mr Cherargei to cross-examine the witness. He refused in protest accusing the magistrate of having proceeded with the hearing without his lawyer.

The next day, he appeared again without his lawyer and made the same request, which the magistrate promptly rejected. He then asked the trial judge to disqualify himself from the hearing, citing bias. In a brief decision, Ms Kegendo rejected the claim, saying she was not biased against him as he claimed.

Two lawyers showed up later that afternoon and begged the magistrate to adjourn the case saying that since they had just received instructions they should have time to go through the witness statements and familiarize yourself with the case.

Mrs. Kagendo authorized the request and postponed them until the next morning. She indicated that she would hear the case on a day-to-day basis until all witnesses testified.

The following day, Mr Cherargei filed a motion to disqualify the magistrate claiming that he had filed a complaint with the Judicial Service Commission, about his conduct.

The magistrate stood firm and insisted on continuing with the trial, saying she had not received an order staying the case.

During the exchange with the magistrate, Mrs. Kagendo tried in vain to calm the young legislator or to refrain from engaging her by respecting the court.

“I am like any Kenyan and I demand to be treated the same regardless of my status. I raised fundamental questions, which have been ignored since yesterday,” he protested.

The fierce exchange between the magistrate and the lawmaker culminated in a decision and a directive to Inspector General of Police Hillary Mutyambai and Director of Criminal Investigations (DCI) George Kinoti to investigate Cherargei’s conduct and determine whether she constitutes an obstruction of justice.

“Why am I intimidated? I thought the courts were safe? he posed.

The magistrate ordered the police to review the proceedings and see if the conduct constitutes an offence.

“I will not recuse myself (from the case). I am not hostile to the defendant and I have no interest in the case. I believe that the request for recusal is another way to request an adjournment through the back door,” the magistrate said.

The magistrate said she was neither hostile nor biased towards Cherargei, but was trying to expedite the case as the judiciary has been repeatedly accused of being the weak link in the criminal justice system by delaying the conclusion of cases.

“I don’t know him (Cherargei). We never compromised, I have no political orientation and I received no instructions from any side. I am trained enough to know how to conduct a procedure,” Ms Kagendo said.

Mr Cherargei, who is trying to ping pong his case, a former pupil of St Francis Cheptais Primary School took his Primary Education Certificate in Kenya in 2002 before going to Kapsabet High School and later University Me, where he studied a law degree and graduated in 2011.

He competed for the Senate seat of Nandi and won the 2017 general election and served as Chairman of the Justice, Legal Affairs and Human Rights Committee until 2020 when he was appointed removed from office during the purge of politicians favorable to Dr Ruto in Parliament.