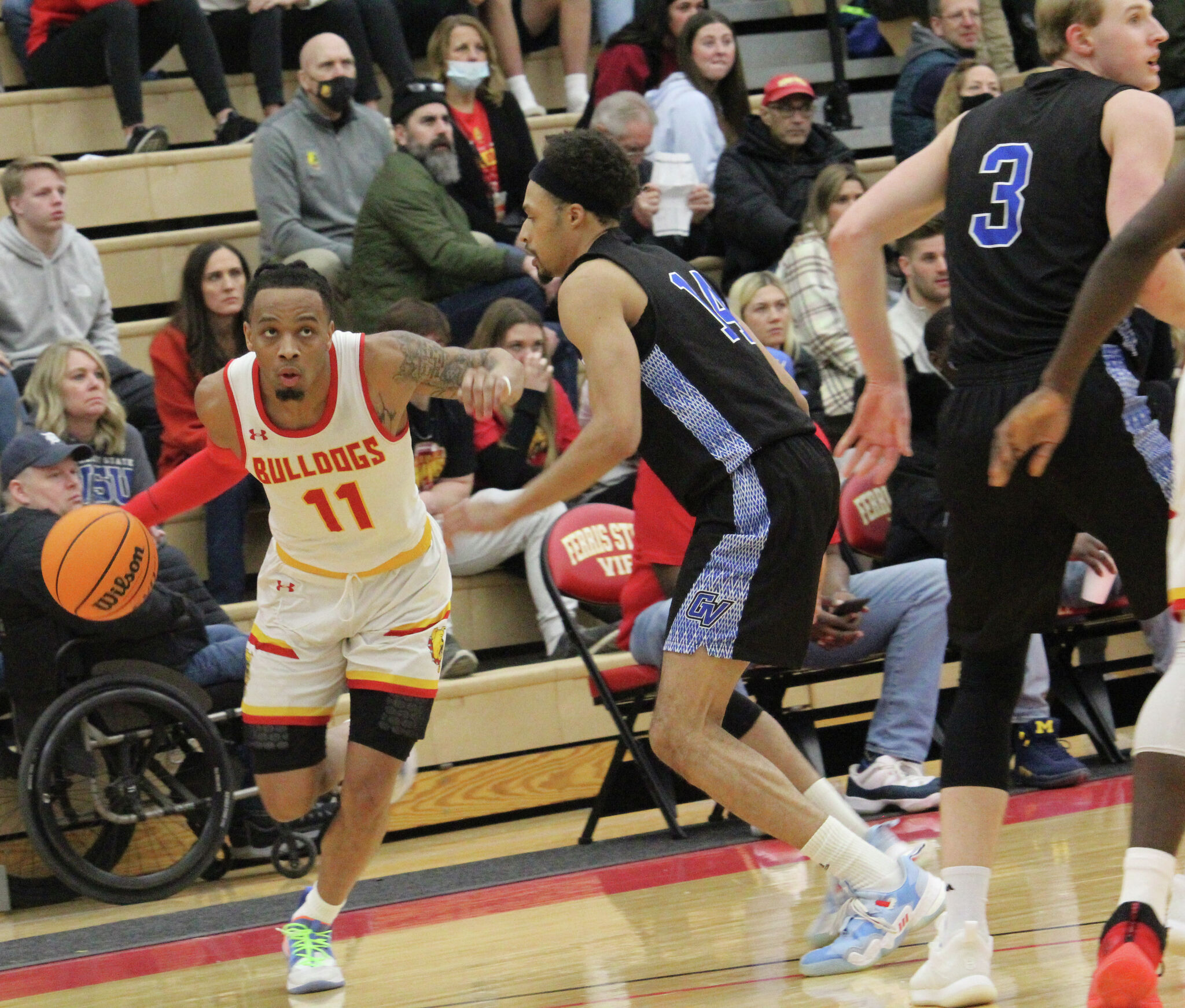 BIG RAPIDS – Lee Higgins was more than happy to have the ball in his hands when the pressure was on.

The Ferris State senior made six of six free throws in the stretch, including a pair with 7.1 seconds left and then again with 5.2 seconds left to seal a spectacular 83-80 victory in the Bulldog men’s basketball game. Great Lakes Intercollegiate Athletic Conference over arch rival Grand Valley on Saturday.

It was nearly a full house at Wink Arena with more than 2,000 fans watching as the Bulldogs rallied from an eight-point deficit early in the second half and kept their perfect GLIAC record at 13-0.

It was 37-37 at halftime, with the Lakers gaining momentum early in the second. From there, the Bulldogs came back strong and took the lead before eventually taking a 13-point lead with 4:19 remaining.

“Passing the ball to each other was really key with saves, rebounds and fundamentals,” Bulldogs coach Andy Bronkema said of his team’s comeback. “The crowd was huge too. The crowd was electric. We made a hit and the lid came off Wink Arena. It propelled us. Our guys entertained the fans.

Grand Valley came back and made it one possession and three times late in the game put Higgins on the line. He answered every time. Ferris held off a potential three-point draw from GVSU star Jake Van Tubbergren from long range at the buzzer to hold on for the win.

“It got a little shaky at the end, but we pulled it off,” Higgins said. “I knew (his free throws) were down. I devoted enough time to it to have confidence in myself. I wanted to take those last free throws.

“Every team has their races,” Higgins said. “Once we have our runs, the game is in our hands.”

Senior Dorian Aluyi helped charge the Bulldogs in the second half and finished with a team-high 15 points and team-best nine rebounds. FSU also had 15 points and seven boards in a valiant effort from senior big man Logan Ryan, who battled injury.

In addition to those two, Higgins had 12 points and the Bulldogs also got 12 points from second Ben Davidson, who hit a big three in the second half and went seven of nine to the free throw boards.

“We started off a little slow, but the second half we picked it up nicely,” Ferris first-year guard Jimmy Scholler said. “We had a lot of momentum, especially from Ben Davidson who came off the bench and played really well in the second half. We had a huge crowd push. It’s great when they come out and rock this place.

The Lakers, who played without head coach Ric Wesley and longtime assistant JR Wallace due to illness, faced FSU up close thanks to the efforts of its five starters who all hit double digits. . It was the second time this season that the Bulldogs beat the Lakers.

“I guess the second time was sweeter because it was home,” Higgins said.

GVSU was led by Deleon Brown with 19 points.

Ferris State, now 18-3 overall and ranked ninth nationally in the D2SIDA National Media Poll and 15th in the NABC Coaches Poll, takes on Davenport Monday night in a rescheduled 7 p.m. contest in Caledonia. This will be the second game between the two teams in five days following FSU’s 17-point home win last Thursday night.