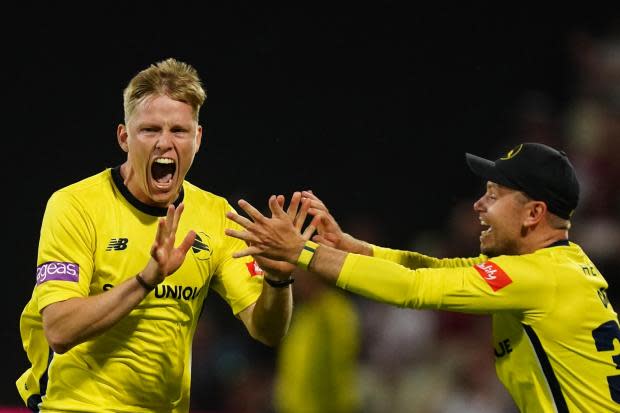 HAMPSHIRE Hawks won the Vitality Blast title for the third time after a superb fight back with the ball took them to a one-point win over Lancashire Lightning in the final at Edgbaston, writes Brian Halford.

Chasing the Hawks’ 152 for eight, the Lightning were well on course at 72 for one in the eighth before a rattle sent them into the final over needing 11 with two new batsmen in the crease.

Nathan Ellis kept his cool to win a fine that left the Lightning on 151 for eight and the Hawks celebrating a famous win.

It was disgusting for Lightning who was propelled into a strong position by Matt Parkinson (four for 26) after the Hawks opted to strike. The England spinner’s wickets included Ben McDermott whose 62 (36 balls) was the only major contribution to a modest tally.

Halfway through, Lightning were heavy favorites and they ran to 50 on 28 balls, but then the wickets began to fall steadily as the Hawks’ bowlers and outfielders mounted the pressure.

The Hawks’ decision to strike seemed to have backfired as they steadily lost wickets from when Richard Gleeson sent the ninth ball of innings into James Vince’s stumps. Semi-final hero Tom Perst landed a killing blow at Luke Wood and then Parkinson got to work taking out Joe Weatherley, Liam Dawson and McDermott.

Parkinson added his fourth wicket when Nathan Ellis was held superbly on the long rope by Tim David and it was left to Ross Whiteley (22, 20 balls) and Luke Wood (21 not out, 17) to make a total that would see them through. gave something to play.

Lightning lost Phil Salt on the fourth ball of innings, brilliantly caught by a plummeting Perst mid-wicket deep, but there were already 12 runs on the board at the time and the early charge was continued by Steven Croft ( 36, 25 balls).

Croft and Keaton Jennings added 60 balls from 43 before the Hampshire spinners started causing turbulence. Croft tickled a hold on the side of the leg to wicketkeeper Mason Crane and Dawson had Jennings and Dane Vilas take odd and extra long coverage respectively.

When James Fuller pinned Tim David lbw it was 118 for five and suddenly the Lightning’s nerves were shaking with 35 required from four overs. The first of them, a brilliant one from Ellis, cost just three points and, as the pressure mounted, Lamb skied Fuller halfway and Luke Wood was exhausted.

There were 11 more needed from the last inning, played by Ellis, then six from the last ball… or so we thought! Ellis pitched Gleeson and the Hawks walked away in celebration before noticing a no-ball call.

The Lightning have a reprieve with three now required on a free kick … but Ellis stayed strong to beat the batter’s shot and this time the Hawks’ celebrations could continue.

A message from the editor

Thanks for reading this article – we appreciate your support in reading the Daily Echo.

Subscribing to the Echo means you have unlimited access to the latest news, features and Saints cover – all with a lightweight advertising website.

You will also have full access to Saintsmoreyour new home for Southampton FC tactical analysis, features and much more.

Don’t take my word for it – subscribe here to see for yourself.