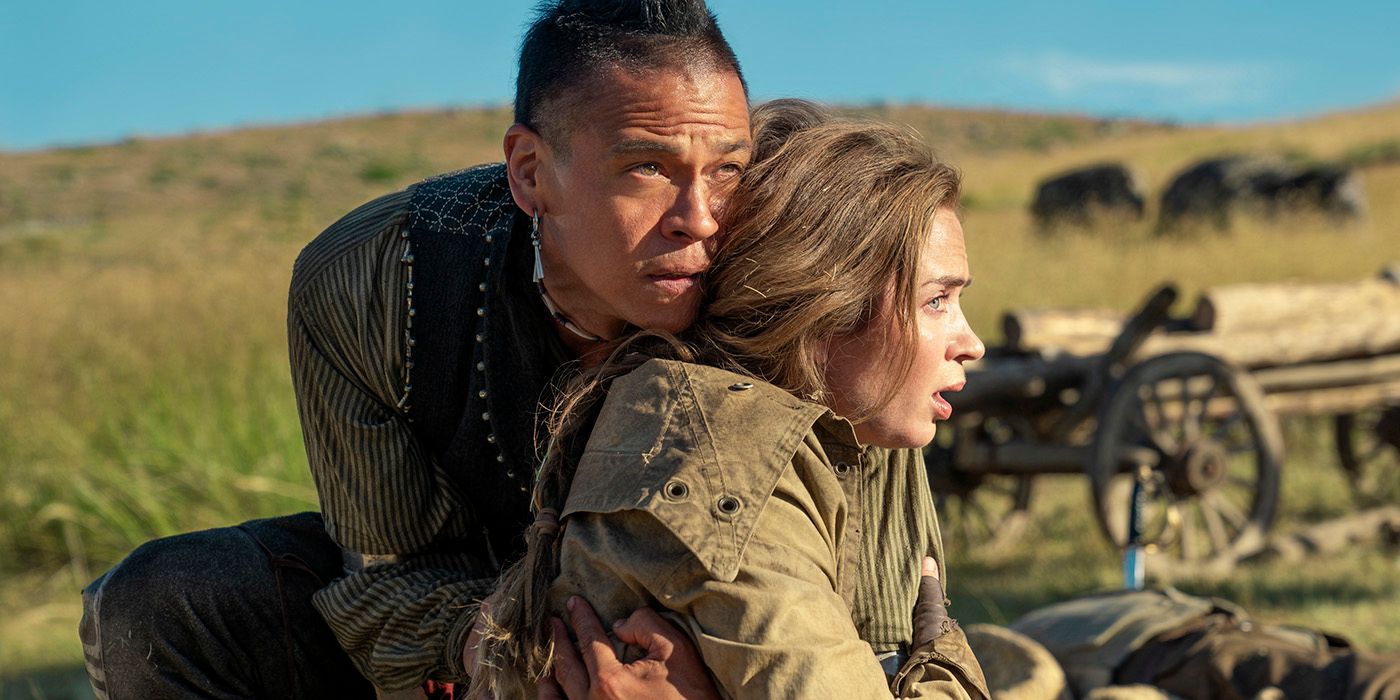 The upcoming period drama produced by Amazon Studios and the BBC, Englishfeaturing Emily Blunt (A silent place) and Chaske Spencer (Wild Indian), will tell the story of two strangers in Central America coming together to traverse the impossible – a terrorizing terrain built on “dreams and blood”. Thanks to Prime Video, the award-winning screenwriter and director Hugo BlickThe legendary six-episode TV series teases the first official images of the two stars running headlong into a harrowing situation.

Produced by Wolf Gait Productions Ltd., the upcoming period drama, set in 1890s mid-America, centers on the gripping story of English aristocrat, Lady Cornelia Locke (Blunt) and of ex-Pawnee cavalry scout Eli Whipp (Spencer), who together must reach the new town of Hoxem, Wyoming, while facing horrific deterrents that will soon test their physical limits and psychological. While Locke and Whipp are both drawn to their destinies, they are unaware that their destinies are tied to their shared past. English will delve into a series of peculiar murders, as the shared past that brought the two characters together becomes clearer and illuminates the future. Taking up the central concepts of identity and revenge, English is set “to tell a particularly compelling parable about race, power, and love”.

Besides Blunt and Spencer, the cast of the upcoming TV series also includes Rafe Spallwho also starred in the 2020 crime television series The Salisbury poisonings. Joining the ensemble cast are Stephen Rea (The shadow line), Valerie Pacher (The king), Tom Hughes (A discovery of witches), Toby Jones (Marvellous), and Ciaran Hinds (Terror). Rea will play local Hoxem sheriff Robert Marshall as he investigates “bizarre and grisly” murders, including that of a young widow’s husband (Pachner). There is no information yet on who the others will star in the limited series.

English will debut on BBC Two and BBC iPlayer in the UK in November. Amazon Prime Video will show the series in the United States, Canada, Australia and New Zealand. Blick is executive producing the upcoming period drama in addition to writing and directing. Blunt also produced the series, with Greg Brenman (The honorable woman), with Colin Wratten (Kill Eve), posing as the producer of the series.

English will be presented in November. Check out the first images below.