ESPN at the center of Disney drama

ESPN hosts had fun with Disney’s Mickey and Minnie ahead of this year’s Super Bowl, but suggestions to spin The Worldwide Leader have been met with serious skepticism.Images: getty

disney and ESPN affiliate became a major focus of Wall Street attention last week after activist investor Daniel Loeb, CEO of hedge fund Third Point, publicly wrote to Disney CEO Bob Chapek and called for major changes in the iconic company. They included cutting costs, maintaining no dividend payout, integrating Hulu into Disney+ and refreshing the company’s board, which Loeb said had “shortcomings in talent and of experience as a group that need to be filled”.

The main focus of the letter, however, was ESPN, which Loeb said should be separated from Disney. 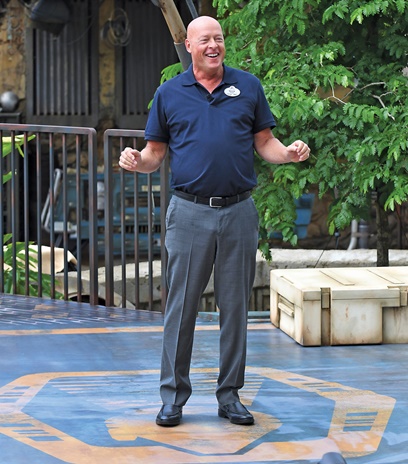 According to Loeb’s letter, a spinoff would allow Disney to offload some of its $46 billion debt on ESPN while giving the sports media giant more freedom to operate. “ESPN would have greater flexibility to pursue business initiatives that may be more difficult within the Disney framework, such as sports betting,” Loeb wrote.

The suggestion was met with considerable skepticism — ESPN’s linear broadcasting business is a major cash flow driver that underpins other parts of Disney’s operations — and Disney pushed back in a letter of its own, standing behind his “strong financial results” and Chapeck’s leadership. And in fact, Chapek had already reiterated to investors the previous week that sports betting remains a top and urgent priority for ESPN, regardless of a potential association with family-friendly Disney.

“We’ve found that our sports fans under 30 absolutely need this kind of utility in the overall portfolio of what ESPN offers,” Chapek said on Disney’s recent earnings call. “We think it’s important, we’re working hard on it and we hope to have something to announce in the future in terms of partnering there that will allow us to access this source of income and ensure that our customers meet their needs.”

Analysts were skeptical of Loeb’s proposal. Barclays’ Kannan Venkateshwar, quoted by Reuters, said of the spin-off idea that it was “unclear to us … what such a move would achieve strategically”.

While ESPN’s recent media deals continue to have strong ties to linear television (broadcast and cable), Disney’s long-term sports strategy revolves around plans to transition to an entirely direct-to-consumer model. . Still, while ESPN+ subscriber numbers continue to climb, growth has slowed recently. ESPN’s streaming platform hit 22.8 million paying subscribers at the end of June, up 53% from a year earlier, but only a 2.2% increase compared to the previous three months. This is the lowest quarter-over-quarter percentage increase since ESPN+ launched in April 2018. Disney’s third quarter has historically been the slowest for ESPN+ subscriber growth, but the platform’s total subscriber count has largely stabilized for much of 2022.

Later this week, ESPN+’s monthly price will increase from $6.99 to $9.99, a 43% increase. The increase could help offset rising production costs, which jumped in the first year of ESPN’s $2.8 billion seven-year broadcast deal. Chapek said the ESPN+ subscription fee increase had “not had a significant impact on our churn, and we believe we still have a lot of room for value.” .

The Future of the NBA on ESPN

Disney has recently been smarter about its spending on rights. He recently pulled out of Big Ten media rights negotiations, which ended last week with CBS, Fox and NBC finally agreeing to pay more than $8 billion over seven years. Earlier this summer, he loosened his grip on the Indian cricket Premier League, handing over a renewal of digital rights to one of the most popular leagues in the world.

Chapek recently went so far as to raise the possibility that ESPN could even pass on an extension to its longtime NBA broadcast partnership, which spans the 2024-25 season, saying the company is “interested in a renewal.” , but only if such a transaction was “shareholder value accretive”.

2022-08-19
Previous Post: Namgoong Min Intrigues As A Profitable Lawyer In Upcoming Legal Drama
Next Post: Flower of Evil Becomes First-Ever K-Drama to Have an Indian Remake