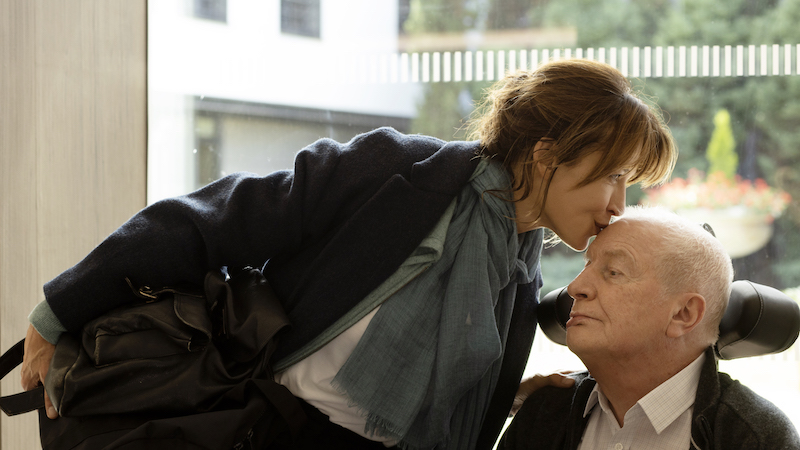 André (veteran charmer André Dussolier) is a wealthy industrialist and art dealer who, after suffering a debilitating stroke at the age of 85, has no desire to live a diminished life. His two daughters try to persuade him that the future still holds many pleasures, but for several months, Emmanuèle (Sophie Marceau) agrees to make secret arrangements for her father to travel to Switzerland. Assisted suicide is prohibited in France.

Legendary Fassbinder star Hanna Schygulla appears in a cameo performance (shown below, center, with Géraldine Pailhas, on the left, and Sophie Marceau) as a serene intermediary from the Bern euthanasia center. While Emmanuele and her sister Pascale (Géraldine Pailhas) argue over their father’s demands, their mother (played by Charlotte Rampling), a sculptor herself struggling with Parkinson’s disease, wants nothing to do with her ex’s wishes. -husband. Over the course of the film, we learn why she is so dismissive of her husband and what an impossible father he has been to his daughters. Ozon adapted the film from the eponymous memoir by the late writer Emmanuèle Bernheim, whose father himself took this path; she worked with director Claire Denis and scripted Ozon’s film Swimming pool and 5×2. This latest posthumous collaboration with Ozon is a masterclass in how to create such drama. In lesser hands, a film about a family debating euthanasia could be sanctimonious and laden with melodramatic scenes. But here, we are presented with lucid and utterly compelling dialogue and a wonderfully complex portrait of family relationships.

There’s a lot of dry humor. Andre is horrified at the thought of being buried anywhere near his despised in-laws. He marvels at the high cost of his trip to Switzerland, wondering how the poor are doing in his situation until Emmanuelle snaps, “They’re waiting to die.” Unaware of his daughter’s irritation, Andre disdainfully whispers, “Oh, poor people.” Dussolier, half face seemingly paralyzed, delivers an extraordinarily compelling performance. Marceau is formidable like the exasperated Emmanuelle and very well supported by Pailhas and Rampling.

Everything went well was beautifully filmed in a series of elegant Parisian interiors – luxury apartments, private hospitals, chic restaurants. Ozon uses subtle color coding – murky blues, flashes of red – to create the milieu of an upper-class intellectual family with an imperious patriarch at its center.

The film would make an intriguing, if exhausting, double bill with Florian Zeller’s Oscar winner The fatherwhich walked similar ground in 2020. But where Zeller’s film was an adaptation of a play and became didactic at times, Ozon works from the mess of Bernheim’s real-life story, and its authenticity shines through.