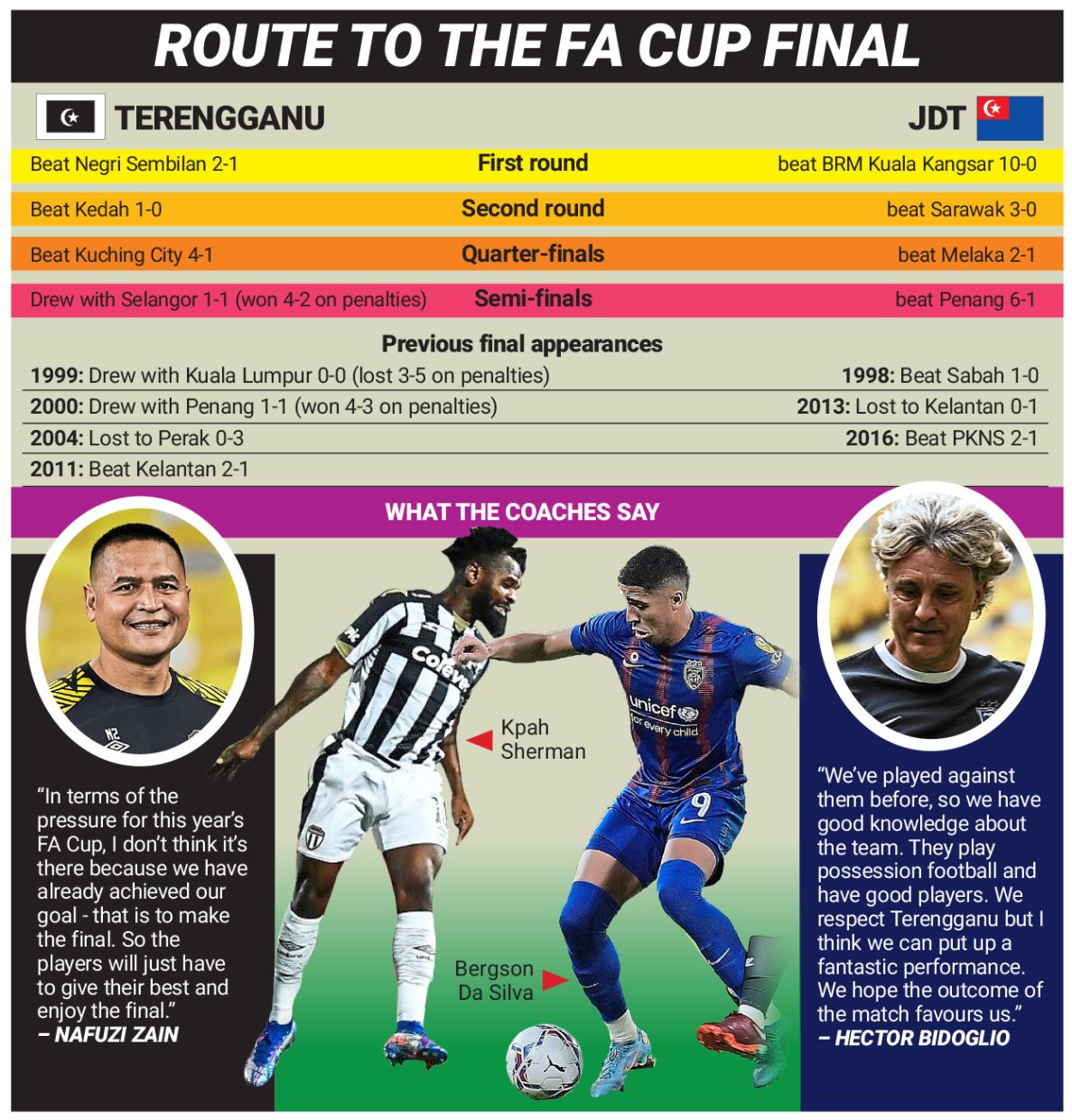 Football: staging for a great drama

PETALING JAYA: Johor Darul Ta’zim wants to avoid another painful defeat in the final while Terengganu is hungry to end his long title drought.

And that sets the stage for a thrilling FA Cup final clash between the Southern Tigers and the Turtles at Bukit Jalil National Stadium tonight.

JDT will visit the same venue where they were beaten 0-2 by Kuala Lumpur in the Malaysian Cup final last year.

They now have new manager Hector Bidoglio, who has the opportunity to win his first title just two months after taking charge and bring the FA Cup back to Johor for the first time since 2016.

Bidoglio insisted the team had not forgotten what happened in the Malaysian Cup final and that would serve as a useful lesson to avoid another heartbreak.

“We don’t think about the past because we always look to the future.

“But it’s good to learn from past mistakes,” said Bidoglio.

“We’re going to continue (what former coach Benjamin Mora did) and maintain the same intensity and work rate to win this game.”

Asked to elaborate on their plans for the final, the Argentine coach said they would find a good strategy to trap their opponents.

“We’ve played against them before so we have a good knowledge of them. They have good possession and good players. We respect Terengganu but I think we can put in a fantastic performance,” he said .

“We have to focus on our style of play and close the space so they can attack. We hope the result will be in our favor.

On the other hand, Terengganu official Nafuzi Zain is determined to have the last word.

Nafuzi said personally that this will be the most significant moment to claim victory as coach of Terengganu.

Nafuzi won the FA Cup trophy twice as a player in 2000 with Terengganu and 2007 with Kedah.

“As a coach, it means more to me to get a championship, especially at a young age and still learning,” the 44-year-old said.

“Every coach wants to win to prove themselves so there has to be a trophy and hopefully tomorrow night, God willing, we get it.”

However, he won’t put undue pressure on the players even though it’s been over a decade since Terengganu lifted a major trophy.

Terengganu last won the FA Cup in 2011 when they beat Kelantan 2-1 at Bukit Jalil National Stadium.

“In terms of pressure, I’m not stressed. Our goal was to reach the final and we achieved it… what is important now is that the players enjoy this moment with the fans.