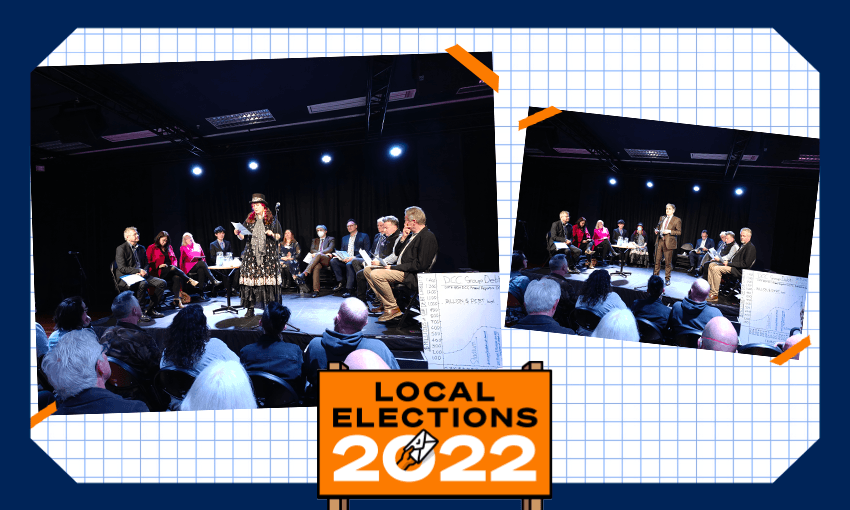 The whole world is a stage as the full cast of Ōtepoti contenders put on their show. Toby Manhire joins the audience.

Jhe theme was theatre, performance and art, and so hopefuls walked the stage. Dunedin’s 11 mayoral candidates gathered just off the Octagon at Te Whare o Rukutia for a forum organized by community theater group Stage South. The new space, run by the Dunedin Fringe Trust, is a shining exception in a city worried about the future of its venues, with the Fortune Theater and Sammy’s live music sanctuary having closed for the past five years.

It was a different kind of show on Tuesday night, but had you poked your head out the Princes Street door you could have easily mistaken the debate for a piece of performance art. There was Mandy Mayhem Bullock, magenta hair tucked into a top hat, regaling the audience of about three dozen with her marquee backdrop. “At your service, I was in charge of a circus,” she said.

There was Ōtepoti’s current councilor, Sophie Barker, in a hot pink blazer. “I grew up in a castle, but unlike Cinderella, I’m self-taught,” she said. “I have also been a performing artist for over 40 years, having spent many years touring and telling stories at Larnach Castle. So I understand where you are.

There was outgoing mayor Aaron Hawkins, in a brown suit, tie and mask – N95, rather than Greek tragicomedy. He did, however, acknowledge the “Sisyphean task” faced by arts practitioners in gaining support from central and local funding bodies and “the toll of the past two and a half years on the arts and events industry”. He was polite and still, leaving the theatrics to a left eyebrow that could challenge Judith Collins’ for the hottest headline in New Zealand politics.

Councilor Jules Radich said he was a businessman, a pragmatist. “I tend to approach the arts from a pretty practical perspective,” he said, although a shirt adorned with colorful birds indicated a creative streak, and he outclassed the competition to the point that I briefly wondered if anyone else was doing their arms, Theatersports style.

Richard Seager seemed to be attempting his own challenge: Could he include in his answer to almost every question disregard for vaccination mandates or trans rights? He could. He was also, he said, linked to Ngaio Marsh and the only candidate to have cycled to every campaign event. “I also like to try my hand at a little poetry from time to time.”

There was Lee Vandervis – the shamelessly polarizing adviser who beat Hawkins on first preferences in 2019 but lost under STV. If the drama is conflict, Vandervis is as theatrical as it gets; he repeatedly and angrily clashed with Hawkins, the Otago Daily Times and his own counsel. Unlike the usual tickets you hear about at local elections, Vandervis recently had an epic and very expensive court battle over a $12 parking fine. end in rejection in New Zealand’s highest court.

He also brought scenography to Te Whare o Rukutia, in the form of a prop: a large whiteboard with the trajectory of the council’s debt drawn in pen. And then, the pantomime. “Excuse me, could you change that?” an audience member chimed in as he stood for an introductory statement. “It’s right in front of my face.” Vandervis wouldn’t move his whiteboard, and he told her that. “No, it’s not right in front of your face and I’m not going to move it.” I put it there, you chose to sit in front, you could have sat anywhere else. He had his own excuse. “Excuse me, if we can start now, and without interruption, I would appreciate it, thank you.”

He looked at the stalls. “My name is Lee Vandervis. I was a consultant for 15 years, but before that, for 22 years, I ran Vandervision Audio and Lighting. Nodding at the equipment in front of him, he said, ‘For most people here it’s a microphone. To me it’s an SM58 on a short boom K&M. He later revealed that he had “put a system in Windsor Castle for the Queen – a big discotheque system”.

The remaining dramatis personae included Carmen Houlahan, another practicing consultant and former publicist for a ska band, who questioned whether the arts got the investment to match their use in city marketing, Jett Groshinski, a 19-year-old who described himself as the “youth candidate”, and David Milne, who was upbeat, bushy-tailed and sometimes looked like he accidentally walked into the room, like the guy who was by mistake put in a live bbc studio to talk about a legal battle in the music industry. “I love playing,” Milne said. “I love actors. So I have a lot of great ideas for what you want.

Pamela Tayor – whose official statement includes the phrase “God opposes the UN, WHO, WEF and Pharmacia depopulation agenda, sexual immorality and climate idolatry” – gave an avant-garde air to the debates, going straight to public participation in the form of a “show of hands”. Specifically: “Raise your hand if you prefer 100 million for bike lanes or 100 million for waterfront renovation? Only one person raised his hand. In fact, he raised both, as if surrendering.

But wait, it’s just 10. Where was 11? Listen, a high frame rises from the ground. A ghost? A Brechtian bursting of the fourth wall? Actually, it’s Bill Acklin, a three-term adviser through 2013. “Excuse me, dodgy knee,” he said. He didn’t want to squeeze his injured leg on stage. But he was intellectually fit, he assured us; with a background in entertainment, primarily musiche understood the needs of the performing arts.

state of the art

Much has been said all night about something called Charcoalblue – not, despite my histrionic imagination, a southern kryptonite, but the international group responsible for completing a live performance feasibility study. The resulting controversial report was slammed by almost everyone on Tuesday night – with Vandervis saying it was ‘essentially a jobs report for the boys’, and that a third of the $300,000 it cost might have been enough to give the Fortune Theater a lifeline. “The Charcoalblue vessel has sailed,” Mayhem Bullock said. It was “a bunch of nonsense,” Radich said. Hawkins said he didn’t agree with his findings, but they should be ‘be careful not to throw the baby out with the bathwater’ and could build on ‘what was helpful’ in the study.

“I haven’t read Charcoalblue’s report. So I don’t think I can comment on the report itself,” Groshinski said. “I have read the entire Charcoalblue report, including all appendices and all consultations,” Barker said. “And one of the things that struck me was how the schedules and the consultation didn’t match the results. So it was very curious for me. Progress had stalled since, she said, leaving people “to feel disappointed,” and she was determined to unblock it.

Milne’s big plan was heritage tourism. “So I’m going to need your help to get people to dress up in old fashioned costumes and have a house where tourists can go and go back in time,” he said.

For an arts-focused debate, there’s been a lot of talk about bike lanes. I’ve lost count of how many times Pamela Taylor has cursed them. His position in a nutshell: “What I will do as mayor is I would take the $96.27 million for a bike path around the Otago Peninsula and use $70 million for a new theater. ” Barker challenged arts practitioners to emulate their lycra cousins. “I urge you, as the cycle lobby does, to keep coming to us as advice.”

What everyone seemed to agree on is that the city lacks sufficient cultural infrastructure, in terms of venues and staff. Mayhem Bullock said a medium-sized venue was a priority. Milne accepted. Acklin said he hoped the Fortune and the Sammy could be resurrected, but had to ask if they were the right size and in the right place.

Raddich repeatedly observed a “disconnect” between the artistic community and the board – without which Fortune could have been saved. Seager wanted to see losses reduced and Sammy sold.

The problems facing the arts were typical of the rest of the city, Vandervis railed, the rotten fruit of “waste, undemocratic secret decisions, business incompetence and a financially illiterate council”. The problem of location could be solved through the use of the Mayfair Theatre, which its owners were willing to donate to the city. “You’re not going to like it,” he told the audience, but it might work as “a multi-use [venue] who will do theatre, music and events”. It sounded good, Mayhem Bullock said, but the venue had accessibility issues. Its priority: “a space built for this purpose here in the city center”.

Taylor had his own idea of ​​what to do “in the short term” with the Fortunes and Sammy while he waited for his waterfront project to be completed. Places deemed unsafe due to mold, earthquake hazard and asbestos must “have the doors open and you can sign a piece of paper to say that you waive all liability in case something happens to your health while you’re at it”.

Houlahan wanted the council to agree and make decisions. “We’ve had too much red tape – too much talk and not enough action.” What they needed, Barker said, was better data to make decisions. “Otherwise we are just building castles in the air,” said the child from Larnach.

For the good of the arts and the city as a whole, Hawkins said to visible fury at Vandervis and his whiteboard, the council he led was right to ‘reject austerity policy’ and resist calls to “reduce council budgets”.

For nearly two and a half hours – more a series of monologues than dialogue – the contestants tackled issues such as the role of heritage buildings, the Octagon’s ‘drunken cesspool’ after dark , how to engage young people and retain talent in the city. Milne said: “I believe young people are our future, for sure…Let’s do a podcast on YouTube, cheer for them.”

Taylor persisted on her own stage. In response to a question about anchor arts organizations and multi-year funding, she said, “I would like to have a list of all kinds of artists and musicians and then pay them for a particular show. What I have in mind, for example, is that one day you go to the dinosaur playground and this person who knows how to make balloon animals, and they hand them out. And then another day, you go to the Octagon, and there’s someone doing this musical performance. And then you go to college, and there’s a bunch of people playing music or a number in front of the students. And then you go to the other gardens, and you see that there’s someone putting on makeup. Get some funds for a bunch of those little creative things.