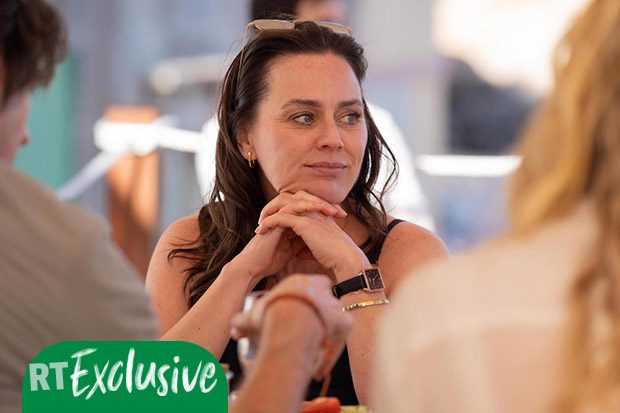 Channel 5 has released a snippet of new thriller The Holiday for RadioTimes.com readers, which portends trouble ahead for participants on a luxury trip.

Jill Halfpenny (The Drowning) leads the cast of the new series, which sees a group of college friends reunite for what promises to be the trip of a lifetime.

However, it is soon revealed that dark secrets lurk just under the surface of this seemingly tight-knit clique, with police officer Kate (Halfpenny) suspecting her husband of infidelity.

Her doubts about him are evident in this clip from the first episode, which sees the haters having a hypothetical discussion about whether they would lie to save their partner from a driving offense.

Kate’s response is steeped in double meaning, as she drops not-so-subtle clues that she’s determined to uncover the truth behind her interactions with a mysterious person registered as “Coral Girl” on her phone.

Watch the exclusive clip from Episode 1 of The Holiday below:

“If Sean was dumb enough not only to lie to me but to get caught,” Kate begins, before pausing and regaining her composure. “The truth is that our car is barely 50[mph]so I think Sean would be safe.”

The Holiday is written by Michael Crompton (Silent Witness) and directed by Laura Way (Blood), with a cast that also includes Owen McDonnell (Killing Eve), Aidan McArdle (The Trial of Christine Keeler) and Liv Mjönes (Midsommar).

The holiday will air on Channel 5 at 9pm on Tuesday March 1 and will continue throughout the week. Check out more of our drama coverage or visit our TV guide to see what’s on tonight.

The latest issue of Radio Times is on sale now – subscribe now to get every issue delivered to your door. For more on TV’s biggest stars,listen to the Radio Times podcast with Jane Garvey.

2022-02-28
Previous Post: A court drama about child criminals
Next Post: Win a copy of the Acceptable Risk detective series on DVD