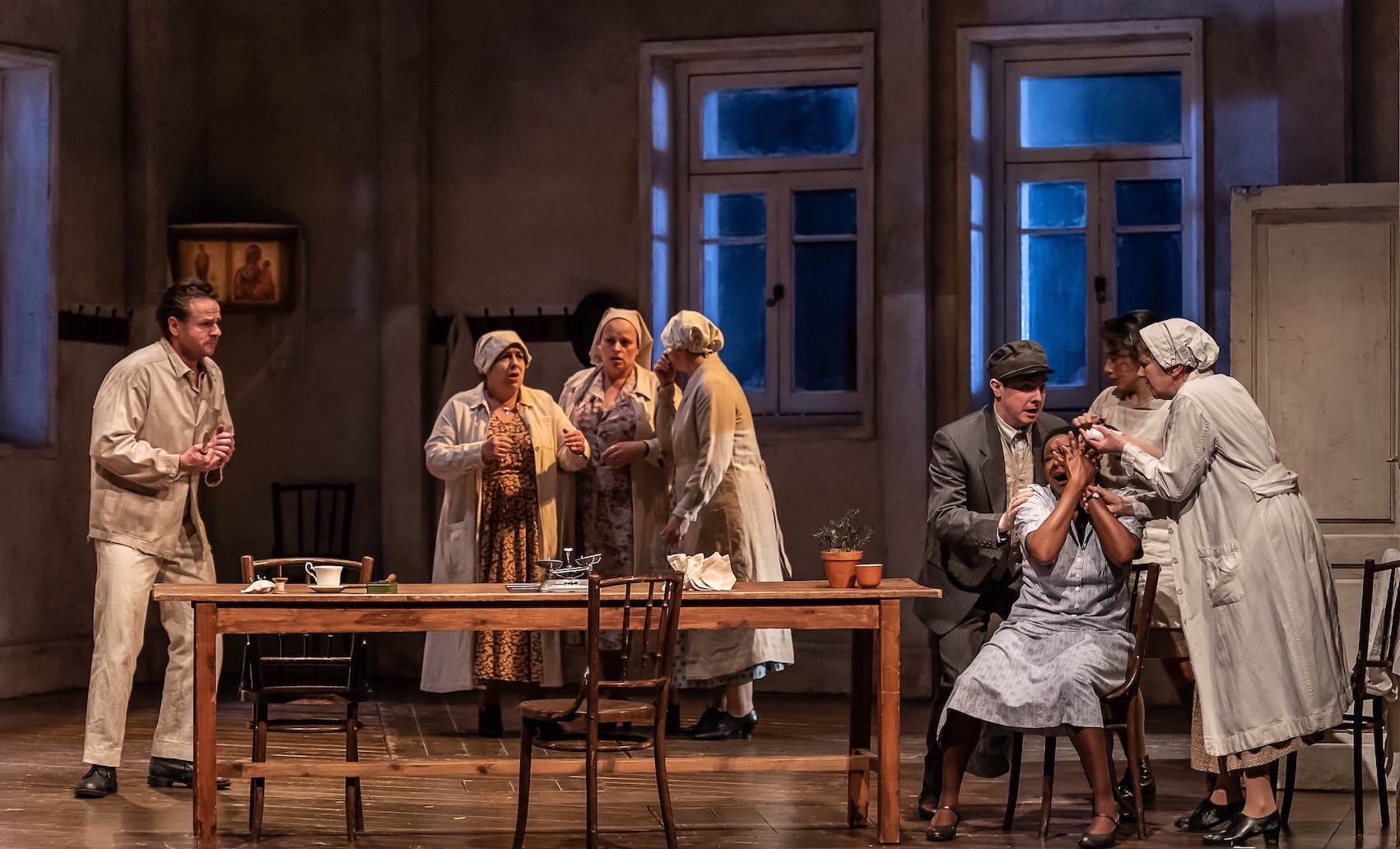 You could, for example, bring up a back curtain revealing a beautiful garden three or four years later with a sweet little boy frolicking through it, the future product, presumably, of Laca and Jenůfa’s love as opposed to the frozen product of his and of Laca. half-brother of Števa, recently discovered under the ice of the river.

Certainly not: half too kitsch! But that’s precisely what’s happening in the WNO revival of Katie Mitchell’s 24-year-old production, now helmed by Eloise Lally. The good news is that, while ruinous in itself, this little spectacular turn of events is atypical. The production has some boring characteristics, but it’s mostly taut and elegant, with a strong atmosphere, featuring idiomatic Vicki Mortimer designs and an incisive focus on character, which is truly the heart of Janáček’s masterpiece.

I still don’t understand why Mitchell – like some other directors – puts the first act indoors in what looks like the factory office, with unofficial looking people coming and going more or less irrelevant, where not only the action but the music (all that brilliant dancing etc.) positively screams for an outdoor setting. For some reason, opera directors hate or fear the outdoors. But when it comes to something essentially interior, like Jenufasecond act of , they are in their element: a chair, a table and a lamp, with a wedding dress on a mannequin behind, all that is needed to present this devastating scene of misery and despair, wrapped in music of such intensity and beauty.

They sing now Jenufa in Czech in Cardiff, and maybe accurately – I couldn’t comment. But in any case they sing it extremely well. Elizabeth Llewellyn, in the title role, was slow (in this second performance) to find what Michael Flanders called the pitch for the room, but once she got down to it she was superb, especially in the horrifying scene that culminates in the kidnapping and murder of Kostelnička. of Jenůfa’s week-old baby, and in that crushing final duet with Laca. It must be said that she moves awkwardly on stage, awkwardly in the first act, almost too painfully post-natal in the second. Jenůfa is a tragic figure, not pathetic. But these are details.

For a powerful presence, we turn to Kostelnička by Angela Denoke (pictured above with Jenůfa of Llewellyn), a moral force expressed in music and posture, but an oddly sympathetic figure, doomed like all who try to play God with noble motives. Surely no composer – not even Wagner – has captured this quality more accurately than Janáček, and one could feel Denoke savoring it as if the part had been written for her. Similarly, Peter Berger cleverly foiled the subtle shift that occurs in Laca’s character after he slashes Jenůfa’s face – another brilliant achievement from this score, with his speech patterns constantly repeated in the orchestra. .

But it’s generally a great cast, with Rhodri Prys Jones finding something almost likable in Števa’s deeply unattractive character, and a whole host of pointed vignettes, including Sian Meinir Buryja’s downtrodden grandmother, the seven feet tall, three feet wide by Sion Goronwy The Mayor, and Francesca Saracino’s horrible Karolka, just Števa’s type but not if he’s dealing with a dead bastard, thank you very much. The author of the original play, Gabriela Preissova, had lived among the kind of people she was writing about, and something of her striking realism shines through in Janáček’s supporting characters as well, which may be one reason why the British companies, often so strong in depth, play it so well.

Tomáš Hanus conducts, initially tending to dominate the singers, but gradually finding the necessary balance between full orchestra and conversational dialogue. I’ve heard this orchestra and choir in a more orderly form, but that’s only because of the extraordinarily high standards they set for themselves. It’s a welcome revival that deserves stronger public support.