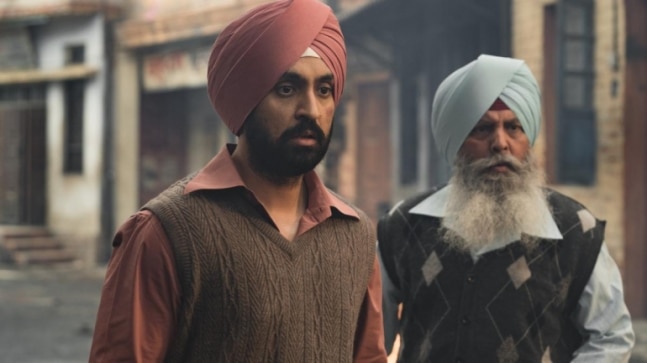 Jogi – now available on Netflix – is an intense and moving drama set against the backdrop of the 1984 anti-Sikh riots. Although the film features fictional characters, it feels realistic as the narrative manages to highlight the human cost of the tragedy.

Jogi revolves around Joginder (Diljit Dosanjh), a charming young man from a working-class family. His world, like that of many around him, is turned upside down after the Prime Minister’s assassination. He soon finds himself fighting for his survival as “Delhi burns”. The rest of the film revolves around his attempts to protect his people from impending danger.

Just the fact that Jogi singlehandedly deals with such a sensitive issue makes it a commendable effort. Its inherently hard-hitting storyline reaches its potential thanks to the fairly well-written script.

Jogi begins with a scene in which the protagonist prepares to leave for work. He is seen spending time with his family and talking about his plans for a birthday party to be held in the evening. This footage is highly relatable and makes it easy and instantaneous to connect with the reel action.

The creators then proceed to “show” the destruction caused by the riots. In one particularly disturbing scene, a character is burned alive in his shop through no fault of his own. In another equally moving sequence, the protagonist tries to stoically console a character after losing a loved one in the riots. The staging of the scene is quite impressive as the silences speak, which is considered the mark of good storytelling.

Jogi then plays out like a survival drama as Joginder, with the help of a friend (Mohammed Zeeshan Ayyub), attempts to help his loved ones escape to safety. This sets the stage for some spooky sequences, which hit the right notes with their organic intensity. An action scene, involving Diljit and Zeeshan, works well too. It feels realistic and raw. There is absolutely nothing, even slightly exaggerated, about it. It’s the heartbreaking climax, however, that turns out to be the film’s best sequence.

On the other hand, the placement of a key flashback scene could have been better. That said, it manages to set the stage for an emotional exchange between two characters. The pacing is also a little slow at times in the first half hour, but that’s not a major issue.

When it comes to performances, Diljit is the heart and soul of Jogi. He plays things down quite nicely, letting his eyes do the talking. Zeeshan is also fabulous. The actor internalizes the character and masters the right accent. Hiten Tejwani, however, doesn’t have enough range. That said, he’s pretty sincere every time he appears on screen.

There is not much room for music in Jogi as it is a very realistic drama. The creators, thankfully, refrain from adding songs to the narrative for fun. The cinematography and lighting do justice to its dark and heartbreaking premise. The other technical aspects are up to par.

In short, Jogi is a bold and effective attempt by Ali Abbas Zafar that demonstrates director Sultan’s reach as a storyteller.

2022-09-17
Previous Post: Dream Girl: Ayushmann Khurrana-starring comedy-drama ‘Dream Girl 2’ will be released in June 2023
Next Post: 10 best drama series of the 21st century, according to the Emmys