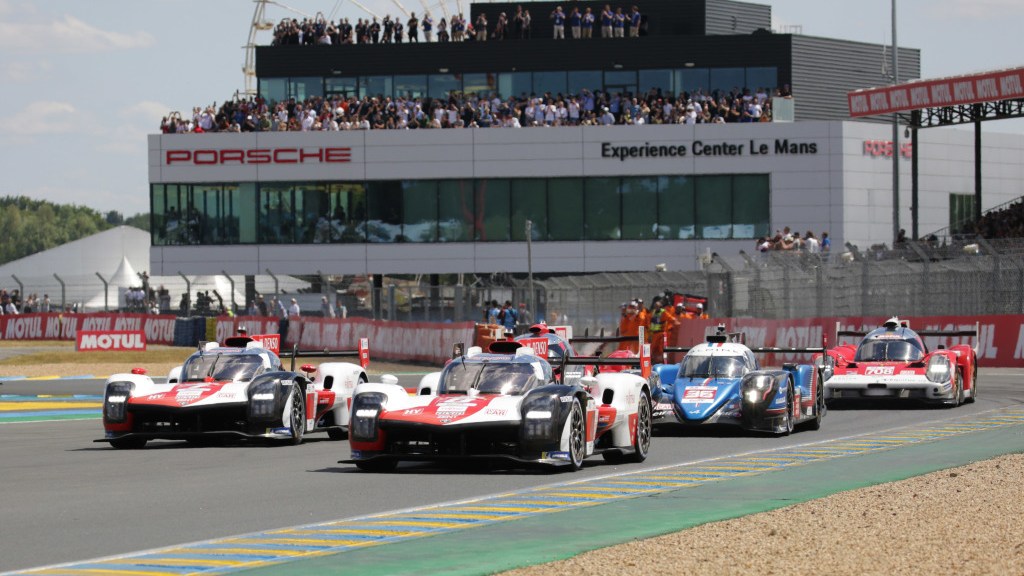 We are only an hour away from the 24 Hours of Le Mans and there has already been a lot of drama on the pitch. The huge trackside homecoming crowd was treated to an exciting start to this one.

Up front, unsurprisingly, it might be a 1-2 for Toyota, with Sébastien Buemi’s #8 GR010 HYBRID holding the lead from pole position until the first stops, when the #7 of Mike Conway managed to blow up the sister car in the drive. Buemi was unable to build any kind of lead in the first stint, complaining of oversteer on the radio which saw him spend a while in the Porsche corners, hitting gravel a few laps before the first stop of the car.

Behind, the two Glickenhaus 007 LMHs race in formation in third and fourth, with No 708 leading No 709, the pair passing the Alpine, who after another BoP change before the race struggles to keep pace and actually fell behind PREMA ORECA in the LMP2 lead on the first lap. As hour 2 approaches, Lapierre is back in P5.

LMP2 is the class that has seen the most drama so far. And it started right from the start of the race, with a collision between the #22 ORECA United and the #31 and #41 WRT ORECAs as the cars crossed the bend before the Dunlop Bridge. All three cars (while running four wide) made contact, with Rene Rast sliding Will Owen into the No. 22, damaging the car’s nose and sending him flying through the gravel.

The marshals eventually penalized Rast and the #31 crew with a one-minute stop-start penalty. It had given a difficult start to the race for the WRT, as the #41 was also damaged by the contact and had to go to the pits for a tire change and a rear change.

“At first there was a lot of confusion – hard to say what happened. There was no contact. Rene didn’t do anything wrong but we have to respect the stewards’ decision,” said WRT team boss Vincent Vosse when asked about the penalty.

In addition to the already hampered WRT race, this incident also cost United Autosports dearly. The No.22 is now two laps down after being pulled from the gravel, limping back to the pits and undergoing maintenance. To make matters worse for the team of Richard Dean and Zak Brown, the No. 23, who was racing in and around the top 5 for the hour, also ran into trouble. The car had to come to an unscheduled stop soon after Alex Lynn first pitted with a puncture, with the team taking the opportunity to add more fuel and change all four tyres. The car is now 20th in class and out of sync in the pit cycle.

With several contenders already struggling, the running order looks like this. The #38 JOTA ORECA of Antonio Felix da Costa leads after a clean and solid first 60 minutes, with the team ahead of the #9 PREMA ORECA from the first pit stops.

Robert Kubica, tasked with driving the PREMA car in the opening hour, is now second after a rocket start, which saw him take the class lead on lap one from row 3 on the LMP2 grid. , even overtaking Lapierre in the Alpine for a brief moment.

The leading trio is completed by the second JOTA ORECA, the n°28 of Jonathan Aberdein. Just outside the top three was Penske’s ORECA, which quietly moved up the standings under the leadership of Felipe Nasr, who moved up to third place but fell back to fourth at the end of the hour. after a fight with Aberdein.

Mirko Bortolotti, number 32 of the WRT, is fifth.

Further down the order, the #47 Gibson Algarve Pro 07 also ran into trouble. Stewart Cox’s team, who worked around the clock to rebuild a car from scratch for much of the week, were forced to act just after the start after trackside temperatures and a slow formation lap combined to cook the No. 47 gearbox actuator, forcing Sophia Floersch to stop on track after the start and limp back to the pits for repairs. The race will be long now for the No. 47 crew, because if they are back, they are now laps behind the leader.

The GTE Pro class, in its final year at Le Mans, unlike the LMP2 division, was static and quiet at opening time, with the entry cars all finding themselves relatively spread out in GTE terms as the hour progressed.

In hour 2, a 1-2 Corvette remains, with the #64 Nick Tandy holding a 2.6 second lead over Antonio Garcia in the #63 C8.R The #92 Porsche, with Kevin Estre at the wheel, is third, and still four seconds adrift after all seven cars in the class achieved their first peaks.

GTE Am, on the other hand, was frenetic. The #61 AF Corse Ferrari of Vincent Abril on pole position couldn’t hold on to the lead at the start and had to give way to the swarm of Porsches behind who fought their way forward and made it a Porsche 1-2-3-4-6 at the end of the first stint.

Leading the race is Alessio Picariello in the Hardpoint 911 after the early pit stops, with the Belgian keeping it clean and picking out several drivers in the opening laps en route to the lead. The #46 Team Project 1 Porsche is second after strong early lap driving from Matteo Cairoli saw him beat leader Harry Tincknell (#77 Dempsey Proton) and make a fine pass to take the lead.

The #79 WeatherTech Porsche is third, with Tincknell fourth after struggling for pace and losing several places before the first pit stops. First of the other manufacturer teams is Nicki Thiim’s Northwest AMR Vantage, which is fifth and splits the five-car Porsche train. The #88 Porsche Dempsey Proton is sixth, while Abril’s #61 AF Corse Ferrari, on pole position, is now 7th.

There were no major incidents in Am during the hour, although the #85 Iron Dames Ferrari was the first car in the class to run into trouble, with Michelle Gatting suffering a puncture, forcing a stop. unexpected.