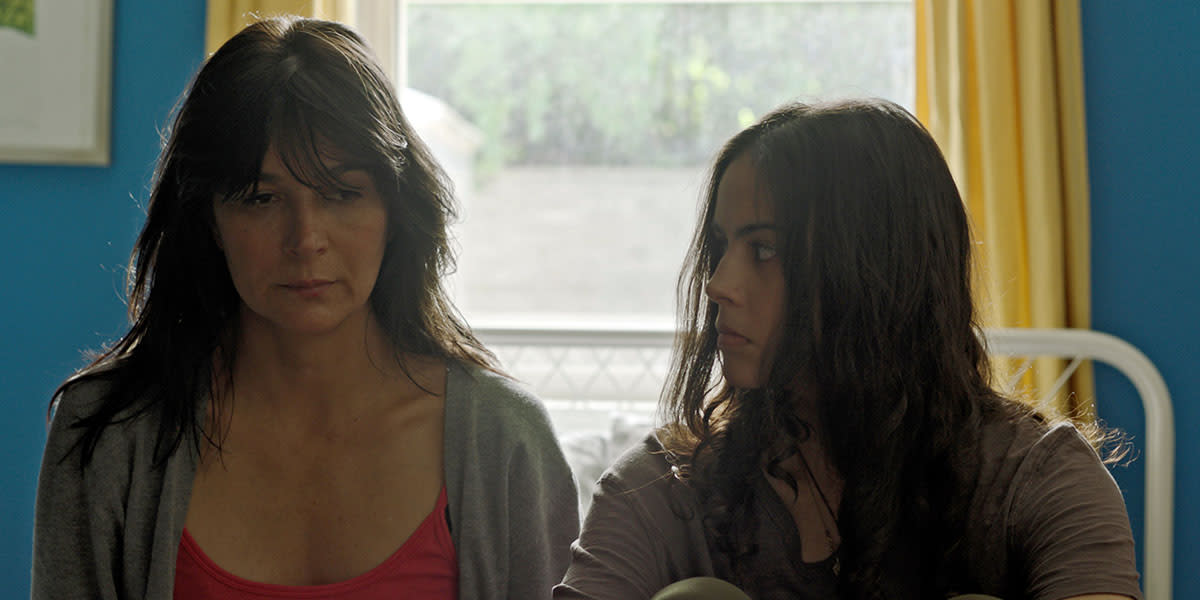 There are many stories about the immigrant experience, and when it comes to those centered on the Latinx community, many of them unfortunately focus on the trauma of immigration itself – crossing borders, being threatened by immigration authorities, facing racism as you try to adjust — or the multi-generational effect of years of immigration down the line. But rarely do we see a movie about what happens in between those two things, what it’s like after you’ve emigrated, after you’ve found a routine and settled in and adjusted to your new home, and the daily struggles of not really feel out of place anywhere, feeling fragmented and split between two places. Lina Rodríguez’s latest film,

This feeling of unease and disorientation is already present from the opening scene, where we follow Aurora (Noëlle Schönwald), who meets a white woman and her husband, before getting into the trunk of their car in complete silence. , seeming to be afraid of something. There’s barely a word spoken in the first 15 minutes of the film, there’s no score at all, no tension relief, forcing the audience to think about what’s going on here. Is she kidnapped or helped? It’s not until the pair reach the Canadian border that we realize they were smuggling Aurora.

Turns out she was an environmental lawyer in Colombia, but when her husband was murdered under mysterious circumstances (movie implies her communication with corrupt companies may have something to do with it, but no clear answer given), Aurora left her life. , his family and daughter behind to seek a second chance.

Although we see her navigate the immigration process and face intense scrutiny from Canadian authorities as she applies for refugee status, the film doesn’t really focus on that. Instead, we skip the adjustment period and jump forward six years to find Aurora after she’s already settled down, found a steady job and a group of friends, and now lives with her daughter. in Toronto. Therein lies the greatest strength of “So much tendernessas Lina Rodríguez decides to skip the story many of us know. Rather than showing the beginning of the immigration story, it shows how such a life-changing event stays with you and informs every aspect of your daily life even years after the fact. We see this in Aurora, a woman who now has a life, friends, a job, a community, and a sexy boyfriend, but is never completely comfortable. She and her daughter have built a new life for themselves, but they cannot shake off the traumatic and painful tragedy that forced them to abandon their homes in the first place.

We don’t see big dramatic moments in similar films, like the threat of losing your visa, or being deported, or the strain of crossing the border, but rather the unpleasantness or the mundane. How you’re always being asked where you’re from based on your accent, how your job, education, station at home doesn’t translate to your new home (Aurora works as a Spanish teacher while she was a lawyer ). How the only line of communication you have with your home country and loved ones is a phone call. In some ways, it feels like a witty sequel to “Blast Beat,” another Colombian movie that captured the fine details of everyday life as an immigrant.

Here Rodríguez emphasizes language, specifically the Spanish version of the verb “to be”, which in Spanish is split into two separate verbs, one indicating a temporary state “how you are”, in relation to a permanent departure “what you are.” This film is about the impossibility of this permanent state when you are an immigrant, how everything about you splits, merges, transforms and ultimately comes out different because of the experience. In this regard, a scene featuring two characters speaking in Spanglish gives one of the best depictions of the language in recent memory, with the two characters switching from Spanish to English mid-conversation, first mixing words, then sentences, then whole answers. switch from one language to another.

To emphasize the feeling of unease, “So Much Tenderness” lacks a musical score that can provide an emotional outlet. Likewise, a slow, not-fully-linear edit helps disorient the viewer so they feel like Aurora, with memories of their time in Colombia flooding them at seemingly random moments.

Now, it must be said that, if the film is positioned as the story of a woman trying to rebuild her life before someone from her traumatic past threatens to derail everything, “So Much Tenderness” doesn’t care. completely. The past influences the present, but the film avoids finding cheap thrills with a story of revenge or danger. Instead, he opts for a quieter, hyper-specific but still fairly universal story of trying to create a new life for himself, while being unable to fully disconnect from the previous one.

“So Much Tenderness” premiered at the Toronto International Film Festival. It does not yet have distribution in the United States.