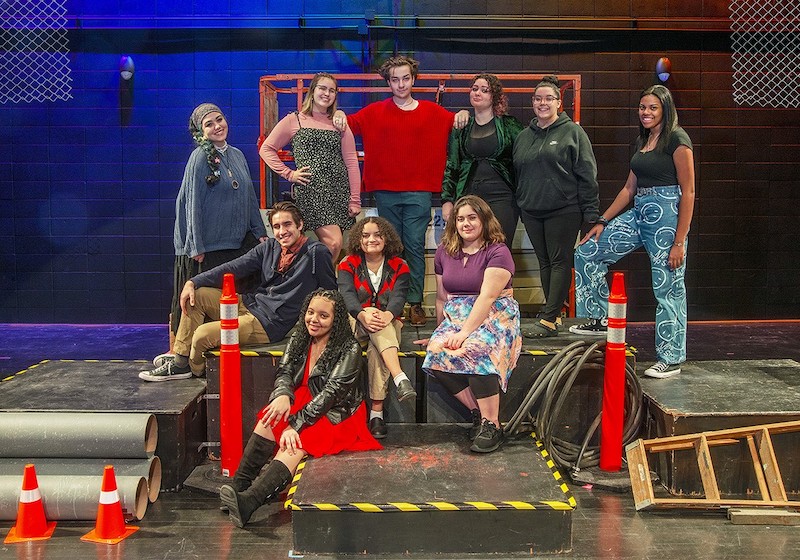 On the second weekend in April, the Drama Club at New Bedford High School will present the 2012 version of “Godspell” to the public with music by Stephen Schwartz, free of charge, in the NBHS Bronspiegel Auditorium. Godspell is a story of love and understanding told through the Gospel of Matthew. In the NBHS staging, the figure of Jesus recruits a group of desperate strangers waiting at a bus stop to learn and spread his messages of love, hope, kindness and tolerance. Together, this group helps Jesus tell different parables using a myriad of games, storytelling, and just enough comic relief. What stands out about Godspell is that each character has their own song and each song is so incredibly unique to their character’s journey following Jesus; no song sounds like the previous song. The musical has the audience completely engrossed in the characters learning about love and tolerance from beginning to end and will leave them with a sense of understanding that even I didn’t have before being a part of this show.

Due to overwhelming interest in members of drama and drama clubs with a range of talents and strengths, the directors felt it was important to find a musical that could showcase everything they have to offer. “We chose Godspell because of the flexibility of casting and directing, but working on this show has been a great gift with which to reintroduce musical theater performance to our students. The universal message of love and community is so perfect right now, and we really enjoyed tackling this text. Many of the students featured in this show are performing on our stage in a musical for the first time! You would never know though; these students are super talented and always give their all. Sarah Cadieux-Pacheco, co-director tells her reasoning for choosing this show.

Senior Club and Drama President Aydan Sullo will play the lead role of Jesus. He says of his experience in this musical, “Throughout our empowering rehearsal process, NBHS Theater Company has fostered a unique and special community. Exploring the magnificent work of Godspell by Stephen Schwartz, the dedication of our cast and crew is a spectacle of that bond. The overall concept of innate leaders inspiring followers to become leaders has taken root in our club. Thank you so much to our patrons and supporters, and please come see Godspell!

Performances of Godspell at NBHS Bronspiegel Auditorium begin at 7 p.m. on Friday, April 8 and Saturday, April 9 with a matinee performance at 2 p.m. on Sunday, April 10. Tickets are $10 for students/seniors and $12 for adults. , and to limit large groups in the lobby can be purchased in advance online at http://our.show/nbhsgodspell A limited number of tickets will be available for purchase in person by cash or check at the box office from one hour before each performance. Tickets purchased in person are subject to a processing fee of $2 per ticket. Godspell is presented courtesy of Music Theater International and is supported in part by the New Bedford Cultural Council, a chapter of the Massachusetts Cultural Council. Customers will be subject to the masking recommendations in effect at the time of the performance.