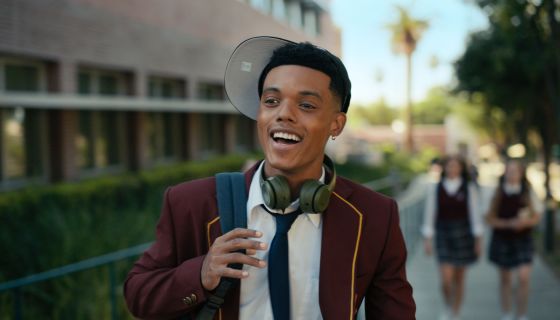 Peacock’s highly anticipated drama series Bel-Air debuts Sunday, Feb. 13 after the Super Bowl. Fans have already taken to social media to voice their thoughts on revisiting a classic like The prince of Bel-Air. We had the opportunity to catch the pilot episode before its release, tour the set, and speak with the cast and crew about the filming process. Although we were also skeptical, we can assure you that it is worth it.

In the hour-long pilot episode, viewers are immediately captivated by the familiar story we know and love from the original sitcom. Fans learn about the modern version of Will and the fight that forces him to uproot his life in Bel Air with his Uncle Phil and Aunt Vivian. As a fan of the original sitcom, this dramatized version isn’t what you’d expect, but the thoughtful cast and crew made the story fresher than ever.

In 2019, director Morgan Cooper created a fan trailer to express a more dire origin story of The prince of Bel-Air. The short trailer instantly became a viral sensation catching the attention of Will Smith himself.

The rest is history.

Peacocks next hour-long drama series Bel-Air takes place in modern America. He reinvents the beloved sitcom The prince of Bel-Air through a dramatic new take on Will’s complicated journey from the streets of West Philadelphia to the gated mansions of Bel-Air. As these two worlds collide, Will relies on the power of second chances while navigating the conflicts, emotions and prejudices of a world far different from the only one he has ever known.

Executive produced by Will Smith and inspired by Morgan Cooper’s viral trailer, Bel-Air takes a fresh and raw approach to this world of bluster, style and aspiration, while exploring Will’s complex journey through a current lens. The new series features an ensemble cast that features Jabari Banks as Will and a creative team that includes Cooper, who serves as director, co-writer and executive producer, and co-showrunners and executive producers TJ Brady and Rasheed Newson.

When asked how showrunners and executive producers Brady and Newson planned to dramatize such a comedic sitcom, Brady explained how director and creator Cooper’s trailer helped in the process.

“We were helped a lot by the trailer that Morgan released,” Brady explained. “When you have a compass reading like that, you know which direction you’re walking in. It was a big plus to have that visual pattern and tone between the lighting and the music to follow.”

Newson followed with the difference by creating a comedy and drama series.

“What if it was real,” Newson asked. “In the pilot, Will meets his family for the first time in a drama series, why exactly haven’t we met our cousins? And why did we struggle in Philadelphia and you were rich all this time? You couldn’t not bring us over for Christmas? So that led to this idea that there must be secrets in this family and now you’re in the world of drama.

After sifting through hundreds of auditions, the cast chose newcomer and Philadelphia native Jabari Banks to play the iconic character of Will on the show. Asked about his biggest lesson filming the show, Banks graciously replies, “People you pass on the way up will also be there on the way down, so you always have to treat everyone with respect and dignity and just be a good person. . Don’t let your ego be too big. Just be a good human.

Banks’ humble and suave demeanor is eerily similar to Will Smith’s character, so it seems like he was the perfect match.

“Leave the actors room to do their thing,” he said during our visit to the set. “Creating moments is such an important attribute for a great actor. We have moment makers. Never want them to feel bogged down with directions. Give them stakes, callbacks. We have young actors who have never done this before, so we’re just here to help empower them and remind them of the emotional cues in the footage.

Holmes, who plays Uncle Phil, doesn’t strike you as Will’s bullying uncle from the original series.

“I didn’t see myself as Uncle Phil,” Holmes said. “But then when I got the material, I really connected to the energy and the essence of the character. Uncle Phil is a vibe. He’s not just a physical presence, he’s an energy It’s a vibe.

“I think, especially in this show, every character has more depth in this one,” Jones responds, adding life to the old characters. “I feel like I’m more Jiminy Cricket than Will. In the original, you don’t know Jazz except as Will’s best friend. I’m like his reminder of home. Even though I’m not not from Philadelphia, we have similar life experiences.I’m the one who always gives him that extra advice and through that, we become best friends.

Simone Joy Jones is also new to television, using her background in theater to bring raw emotion to the screen. Simone shares how she breathes new life into her Lisa character.

“Lisa is someone who feels familiar but not at home,” she adds. “It’s a bit of soul food in a place that’s really plastic.”

Bel-Air is a thoughtful new take on a classic show, and the cast and crew have worked diligently to do it justice. Will Smith mentioned during the Wednesday, Feb. 9, immersive drive-in experience how he had no interest in ever touching the beloved sitcom. That is, until he sees Cooper’s brilliant storytelling.

You know the Banks family, but not like this. Be sure to catch the next drama series Bel-Air premiering on Peacock on Sunday February 13, 2022 with the first three episodes at launch and new episodes released weekly thereafter.