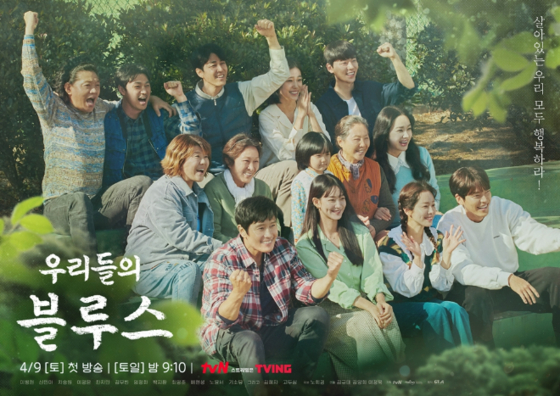 The main poster for the highly anticipated upcoming drama series “Our Blues” was released by broadcaster tvN on Tuesday.

The poster features the 14 actors who have been cast in the drama, including Lee Byung-hun, Shin Min-a, Cha Seung-won, Han Ji-min, and Kim Woo-bin.

The caption on the poster reads: “To all who are alive, may we all be happy!”

“Our Blues” is set on Jeju Island and deals with various characters who are at different points in their lives.

Lee Byung-hun will play a Jeju-born man who sells produce from his truck; Shin will play a woman who recently moved to Jeju; Han will play a haenyeo, a diver who picks up seafood underwater; Kim will play a pure-hearted captain of a fishing boat; and Cha will play a man who returns to Jeju after living in a city.

The series is written by Noh Hee-kyung, a famous screenwriter in Korea and directed by Kim Kyu-tae. The two often work together and some of their notable works are SBS drama series “It’s Okay, That’s Love” (2014) and tvN series “Dear My Friends” (2016).

“Our Blues” premieres on April 9. Its episodes will air every Saturday and Sunday on tvN at 9:10 p.m. The episodes will then be made available on video streaming platforms such as Tving.