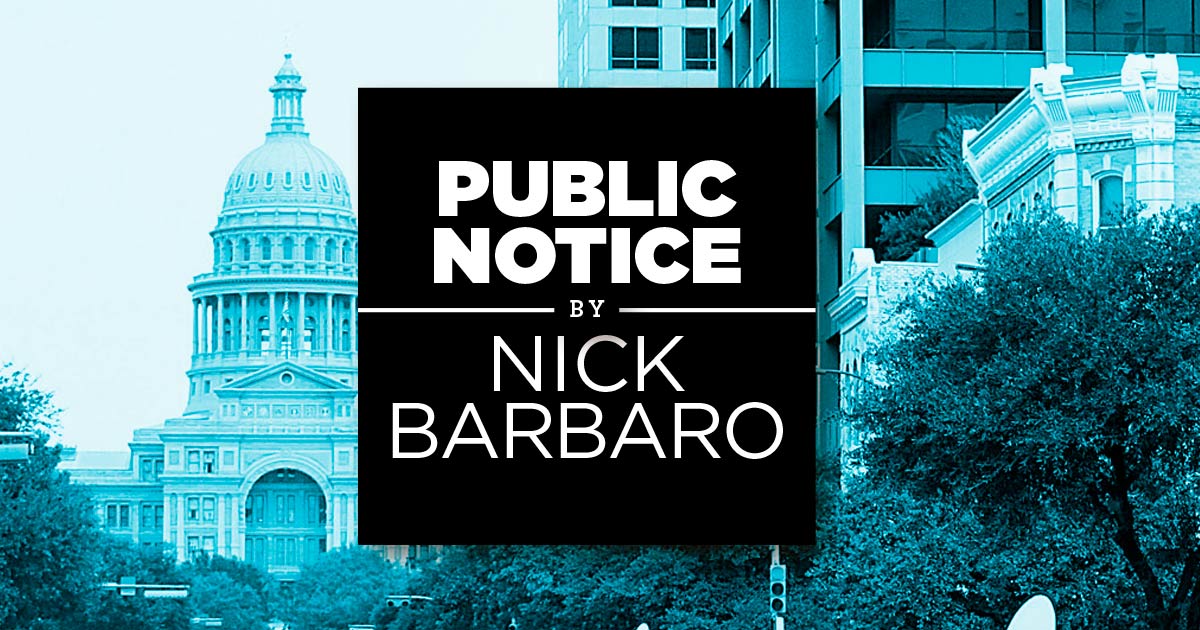 Public Notice: No more drama in Hays County: No more ODA to City Council, and what’s a man’s trash? – News

The decades-long struggle for the expansion of HS 45 in southwestern Travis County took a bizarre turn last week, with the Hays County judge Ruben Becerra publish on Facebook than two of his colleagues, “Commissioners Mark Jones and Walt Smith liedand misled the court to allocate funds for an I35 extension via Buda connecting SH45. The funding passed Aug. 30 on a 4-1 vote after the two men assured their colleagues that Travis County Commissioners were “very positive” about the In fact, Travis County Commissioners and the Austin City Council adamantly opposed the connection, which “would effectively make Mopac a bypass of I-35,” according to a letter TravCo commissioners sent this week, which goes on to say that ” this decision by Hays County would have a profound and detrimental effect almost entirely on Austin and Travis County.”

As you’d expect, there are stories here, and they go way back. On the side of the SH 45, road warriors tried to cross a west loop for almost 50 years now, and for about 15 years, have focused on building parts of it, while denying any intention to build a full-fledged loop, which would require a full environmental study on this sensitive area. So this proposal to start the building from the south end sounds the alarm.

So there is Hays County himself. Becerra, Smith and Jones are all up for re-election in November, Becerra as a Democratic reformer, Smith and Jones as GOP majority leaders, most often opposing this reform. Smith, meanwhile, just yesterday pleaded guilty to a lesser charge in a 2021 impaired driving accident Case on Lake Austin Boulevard, with critics claiming he also faked the truth there, claiming ‘no blood was drawn, no breathalyzer test was given and officers at the scene did not expressed no suspicion of impaired driving”, when in fact he refused the alcohol test, after apparently failing a field sobriety test. And we could connect the dots of that to last week’s cover story about the San Marcos cop. ryan hartmannwho escaped DWI charges and regained his job at the SMPD after killing Jennifer Miller in a reckless driving incident, with an open 24-ounce beer in his console. Or, to two recent stories about conditions in the Hays County Jail in San Marcos, where Ranulfo Benitez-Morales could lose a leg due to what he describes as inadequate medical care, and inmates languish because “Hays County courts are described as some of the slowest in the state”, according to the report by Brant Bingamon of September 9. A group called Mano Amiga has been advocating for criminal justice reform in and around Hays County for five years; watch them manoamigasm.org.

Last week Austin City Council meeting, Council voted unanimously to require commercial properties to pay a park dedication fee and to clarify some of the regulations regarding these fees; amendments proposed by Board members Natasha Harper Madison and Chito Vela that would have limited these fee requirements were rejected. In other actions, the Council refused to adopt the Austin Police Oversight Actinstead of placing it on the May 2023 ballot, and restored ODA automated license plate reader program.

Next weeks September 29 meeting has a relatively small agenda, with the main event being the return of the Statesman POUD, the massive development deal at 305 S. Congress; no sign of compromise yet, with affordable housing being (as usual) the main sticking point. Also note: articles 77-78 bring former planning commissioners Fayed Kazi and Conor Kenny return to the Council Chamber as owner and agent, respectively, of a construction project for “60 housing units and support services for SAFE alliance, [plus] a separate mixed-use building with 23 multi-family units and professional offices,” just north of the Mueller development on Lancaster Court. In addition, of course, communications with citizens, when Carol Anne Rose Kennedy will use his three minutes of fame to discuss FEDERAL MANIGATIONS. She’s been a regular for at least 15 years now; maybe she’ll get a proclamation.

The Waste Transformation Challenge is back in person this year: Texas Campaign for the EnvironmentThe 12th annual fashion fundraiser features amateur and professional fashionistas who use at least 90% recycled materials for their designs. It’s this Saturday, September 24 from 5 p.m. to 9 p.m. at Texas Disposal Systems Pavilion & Wildlife Ranch in southeast Travis County, and airs from 7-8:30 p.m. Food and drink, a performance of SaulPauland a live, online auction that is already live online. More info on trashmakeover.com Where texasenvironment.org.

City Council Candidate Forumsco-sponsored by the city, the Ethics Review Commission and the local League of Women Voters, resumes tonight at the South Austin Senior Center, 3911 Menchaca Rd., with District 5 at 6 p.m. and District 8 at 7:30 p.m. Watch in person, online, on TV or radio, or by phone; see more info on austintexas.gov/candidateforums.

Send gossip, dirt, innuendo, rumors and other useful information to nbarbaro at austinchronicle.com.

Do you have something to say ? The the Chronicle welcomes opinion pieces on any topic from the community. Submit yours now at austinchronicle.com/opinion.