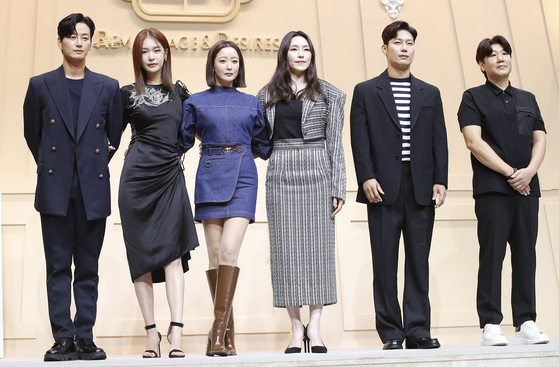 From left, actors Lee Hyun-wook, Jung Eugene, Kim Hee-seon, Cha Ji-yeon, Park Hoon, and director Kim Jung-min pose during the press conference for “Remarriages & Desires” at Crest72 in Jung District in central Seoul on Wednesday. The show is set to premiere on Netflix on Friday. [NEWS1]

Marriage is a business for the ambitious in the upcoming Netflix drama “Remarriage & Desires.”

Lead actor Kim plays a widow and single mother who plots revenge against her late husband’s scheming mistress, played by Jung, whom she meets at the matchmaking agency. Park plays a rather naive member of the dating agency who still believes in pure love, and Cha plays the agency’s manager.

At the press conference for the drama at Crest72 in Jung District, central Seoul on Wednesday, Kim said she decided to join the cast of “Remarriage & Desires” due to the universality of the topic. main part of the drama.

“A lot of people want to marry a good person,” she said. “I think this modern marriage story taps into those desires and I think it would be a story that everyone in the world could empathize with and appreciate.”

She pointed out that the upcoming series deals with an institution, however, which is uniquely Korean.

“I was told that matchmaking services and agencies that categorize people based on aspects such as their finances, family, or physical appearance are only offered in Korea,” Kim said. “I thought this setting might be interesting and a bit fancy for people outside of Korea.”

She continued to say that the drama engages audiences with relatable emotions. “Judging others on mere looks or their money is certainly morally questionable, but it’s something a lot of people tend to do. Maybe after our drama, matchmaking services like the ones in Korea will appear elsewhere in the world!”

According to the cast of “Remarriage & Desires,” the series has invented a new kind of drama that crosses different genres.

“It’s a kind of drama that Netflix Korea has never seen before,” Kim said. “The show is about marriage, but what it’s really about is people’s deepest desires and their hearts.”

“I want our show to show that Netflix can do this kind of complex show,” Lee added. “There have been many genres created by Netflix Korea, but I anticipate ‘Remarriages & Desires’ to be especially new and fresh for viewers.”