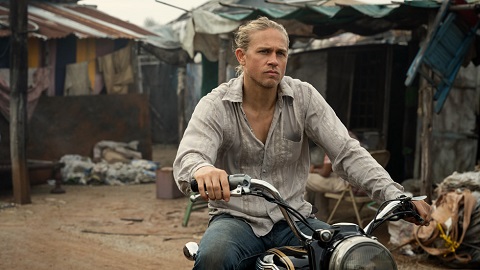 Apple TV+ revealed more about the upcoming drama in a press release.

Apple TV+ today unveiled a first look at “Shantaram,” a new drama series starring Charlie Hunnam (“Sons of Anarchy”), and based on the internationally bestselling novel by Gregory David Roberts. The highly anticipated Apple Original series is a hopeful cinematic love story coupled with a thrilling epic adventure that follows one man’s journey to redemption through a life-changing land. “Shantaram” will make its worldwide debut with the first three episodes of its 12-episode first season on Friday, October 14, 2022, followed by a new weekly episode every Friday until December 16, 2022, on Apple TV+.

“Shantaram” follows a fugitive named Lin Ford (Hunnam) seeking to get lost in the dynamic and chaotic Bombay of the 1980s. Alone in an unfamiliar city, Lin struggles to avoid the trouble he flees in this new place. After falling for an enigmatic and intriguing woman named Karla, Lin must choose between freedom or love and the complications that come with it.

The series is written and produced by Steve Lightfoot, who also serves as showrunner. Bharat Nalluri directs and executive produces. Andrea Barron, Nicole Clemens, Steve Golin, Justin Kurzel and Eric Warren Singer who co-created the series with Lightfoot, are also executive producers. The series is produced for Apple by Paramount Television Studios and AC Studios of Anonymous Content.

Apple TV+ delivers premium drama and comedy series, feature films, groundbreaking documentaries, and entertainment for kids and families, and can be watched on all your favorite screens. After its launch on November 1, 2019, Apple TV+ became the first all-original streaming service to launch globally, and created more original hits and received more awards faster than any other streaming service in its time. beginnings. To date, Apple Original films, documentaries and series have been honored with 250 wins and 1,123 nominations and counts, including this year’s Best Picture Oscar winner “CODA”.

A first date for Shantaram will be announced later.

What do you think? Are you planning to check Shantaram on Apple TV+?