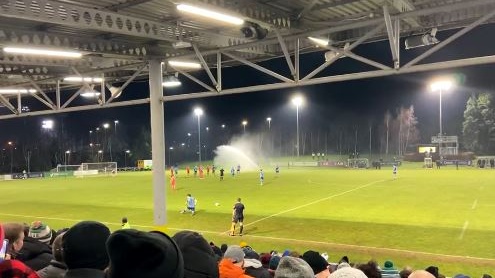 These teams drew twice last season in the Premier League, so perhaps another stalemate between the two promoted sides can’t be called a surprise.

Shelbourne will be the more frustrated of the two given how much time they’ve had on the ball, but in truth, they’ve never created enough to earn the three points for Tolka Park. For all the time they spent defending, it was UCD who actually worked the best chances, even though they didn’t have enough ball to do so consistently.

In the absence of goals, the entertainment highlight was a pair of rogue sprinklers who stopped the second half for eight minutes. The poor gardener was forced to cover for the first culprit, only for the second to leave as soon as he did – much to the chagrin of the crowd.

Shels’ Conor Kane had freedom from Belfield down the left flank in the first half, repeatedly showing an ability to drive the ball and beat defenders only for the incisive cross to never come. It was a theme that continued throughout the rear fender.

After barely seeing the ball in the early periods, Seán Brennan started to come on well for the students. Given that he moved freely in midfield, he chose many holes in the middle and had his own maze run cut short by falling into the box, his penalty request rightly falling on the ears of a deaf.

Slowly building their way into the game, UCD had the best chance of the half as Colm Whelan’s cross was turned on goal, forcing Lewis Webb to make a smart save at his near post.

For all their failure to create chances, it always looked like Shelbourne’s press could force the UCD backline to provide an opportunity. That’s exactly what happened moments before half-time, but Jack Moylan couldn’t hold back his efforts.

After the break, Damien Duff’s side were beyond wasteful. Considering how difficult life was when it came to picking the UCD midfielder, they passed up far too many chances to cross from long range. The result was that Lorcan Healy went the full 90 without being called into action for the UCD goal.

The hosts had the two best chances to force a winner, with Dylan Duffy hitting a tame shot straight at Webb when he was sent one-on-one after good work from Whelan, while the latter found himself with the ball six yards out in the final minutes. only for the Shels keeper to gobble up another weak effort.