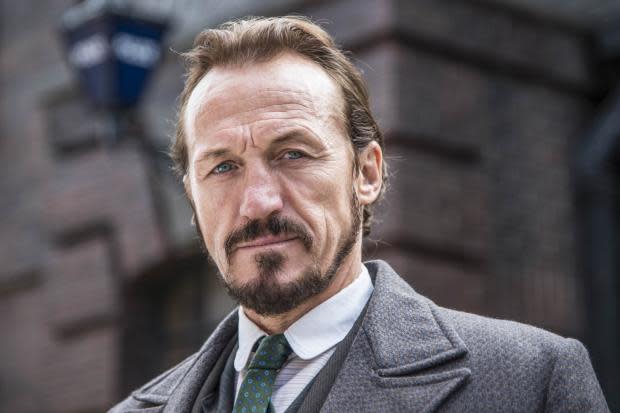 When Ripper Street star Jerome Flynn walked into a Pembrokeshire charity shop recently, manager Mel John ‘glued’ him for a good cause.

The actor, famous for his roles in Game of Thrones, Ripper Street and Soldier Soldier, donated two Ripper Street costumes and a script to the Paul Sartori charity shop in Fishguard some time ago.

But when he came to browse the bargains last week, Mel asked him to sign and authenticate the popular TV drama’s goodies to maximize their earning potential for the charity.

Duly signed by the star, all of the items are now for sale on Paul Sartori’s ebay store, meaning a member of the public has a great chance of picking up some really great TV memorabilia.

The star had handed over two suits he wore on the set of Ripper Street and a signed script from the popular BBC drama, to raise money for Pembrokeshire end-of-life charity Paul Sartori.

The costumes are auctioned on ebay

The costumes were worn by Flynn’s Ripper Street character Bennet Drake, a detective sergeant investigating a murder on the streets of Whitechapel.

“He comes around quite often,” Mel said. “He’s a good customer.

“It’s a fantastic gift. I can’t thank him enough it’s wonderful. We hope it will make a lot of money. »

One of the Ripper Street suits is made by Louis Copeland, the famous Dublin tailor well known for catering to stars such as Pierce Brosnan and Richard Harris.

It consists of trousers, suspenders, a suit jacket and a tweed overcoat.

The second costume consists of pants, suspenders, a waistband and a costume jacket.

Both are in good condition, although there is a small tear in the inside pocket of one jacket.

They are accompanied by this important authentication note signed by Jerome Flynn.

The signed script comes from series four of Ripper Street filmed on Friday 13 November 2015 and offers a fascinating behind-the-scenes look at the making of the acclaimed BBC drama.

“The costumes are gorgeous,” Mel said. “They are so well made.

“It was very, very nice of him and we really appreciate it.

“It’s good that he lives locally and supports a local Pembrokeshire charity.”

All items are auctioned on the Sartori Stores ebay store until August 6th.

All money raised from the sale of the costumes and scripts will go to Paul Sartori Hospice at Home, which provides end-of-life care and support in Pembrokeshire.