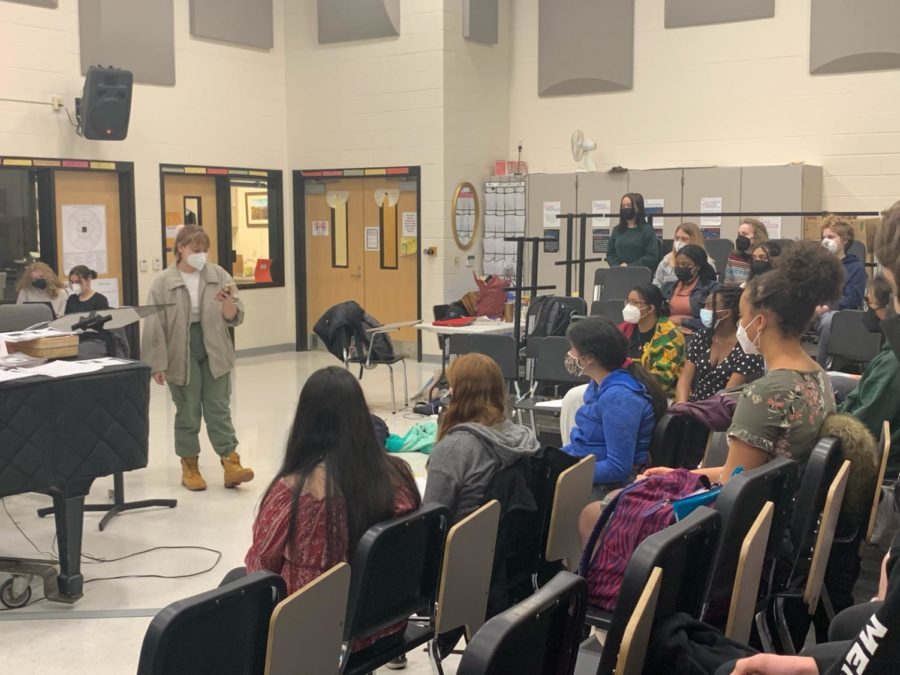 Following backlash over the use of Nazi iconography in the spring production of “The Sound of Music,” former theater director Laura Andruski quit her job on Monday, February 7.

After several meetings with theater administration and sponsors and the search for a new director, Ms. Emily Davis agreed to take over the position for the spring, and the theater department agreed to further limit the use of the two-banner Nazi iconography with swastikas. Banners will not be created or manipulated by students and must be locked at all times except on actual show dates.

The drama department also suggested tackling the anti-Semitism and hate speech depicted in the play through a trigger warning on the poster and donations to the Holocaust Memorial Museum in Washington DC collected overnight. a spectacle.

“The Sound of Music” is set in the 1940s, when Nazi Germany invaded Austria. In Act 2, the captain is informed that he must serve in the new Nazi army, so the Von Trapp family tries to flee Switzerland through the Alps.

The traditional staging of “The Sound of Music” includes actors representing Nazi soldiers and a setting with red banners with swastikas.

“There’s a significant part of the play which was a scene where banners were falling during a festival which, in collaboration, the students and the adults felt that if you took that out, from the musical, it wouldn’t really communicate the impact of this moment,” said junior Kit Kringel, who plays the Baroness.

Members of the Black Maskers initially raised concerns regarding the creation, handling, and use of props and set design. Stage manager and senior Johnny Newhouse emailed Ms Andruksi on February 2 asking if there was “a way to stage the show without bringing Nazi memorabilia into the school”.

In response, teachers and staff involved in the production affirmed that the show would continue, but expressed their willingness to discuss student concerns in person. In an email to the drama department, Ms Andruski said: “Drama is not only used to entertain, but to enlighten and educate…we think it will be important to remind our audience WHY this symbol of hate and bigotry deserves our scorn and ridicule She said her director’s vision was to stay true to the love story of the musical while simultaneously portraying Nazi Germany as the antagonist, educating the audience on the mistakes of the past.”Finally, participation in [the] the drama club is voluntary. If you are not comfortable with the use of Nazi iconography that will be used in the production, you do not need to participate,” Andruski wrote. “For those who decide to be a part of ‘The Sound of Music,’ I look forward to sharing the important lessons that can be learned from this show with each other and with our audience.”

Some students were not satisfied with this answer. “It sounded the alarm because [leadership] was like, let’s talk to other adults in the club rather than talking to other students,” Newhouse said.

Shortly after, 113 students wrote and signed an open letter expressing their discomfort with the manipulation of the sets and requesting a meeting with the adults involved.

“Given how Nazism is treated in The Sound of Music, we believe the students offered several options to effectively replace offensive iconography,” the letter reads. Some of the suggested replacements had been to obscure the iconography with paint or simply use a red circle on the banners.

“Most people were unhappy with the response of the director, and also, in general, of the adults involved in the production, for basically ignoring the voices of the students and not listening when people were expressing how badly they were. comfortable,” one of the authors of the open letter, Julia Angel, said.

This led to a group meeting attended by administration, Black Maskers management, and theater sponsors. It was clarified that students would not wear armbands and that no one in the crew would draw or manipulate Nazi iconography.

During the meeting, the drama department also agreed to include the swastikas in a scene and offered to accompany the production with educational measures about the Holocaust. There are tentative plans to include information in the program highlighting Nazi banners as a trigger warning, and collect donations during the show for the Holocaust Memorial Museum. “We are [also] working with Ms. Deeney and students from the Jewish Student Union to create consultative lessons on anti-Semitism in America today,” said theater committee member Victoria Koretsky.

Auditions for the musical which were due to take place after school on February 8 and 9 were canceled for a brief period last week after Ms Andruski resigned. This led many to believe that the springtime musical would be canceled. A quick search for a new manager ensues. After four days of uncertainty, the theater department has announced it will resume preparations for the springtime musical on Thursday February 10, after Ms Davis, the theater’s former manager, agreed to return to her old position to spring.

When she found out that RM’s kids didn’t have a principal, we talked about it a bit and thought, ‘She can make it work.’ And now she’s thrilled to do it,” said Mr. Davis, an RM teacher and husband to Ms. Davis. Ms. Davis ran the same show almost two decades ago, in 2005.”It’s a show she knows well, but it’s kind of like a whirlwind rising up and ready to start again,” Davis said.

The particular scene involving the banners with swastikas is a music festival where the Von Trapp family performs. Halfway through, the Nazis take over, creating a climax in the room.

“Working together, the students and the adults felt that if you took that out of the musical, it wouldn’t really communicate the impact of that moment,” RM manager Alicia Deeny said. Many students expressed their side that the streamers should be problematic and make viewers uncomfortable. “It would not capture the fact that we should be disturbed by these images,” Deeny said.

Although both directors have expressed reservations about keeping the storyline historical, Ms. Davis expects “the show to go on, done in a way that feels authentic to it,” according to Mr. Davis.

Auditions resumed on Thursday, February 17, and took place the following weekend. Between new changes and a new director, “the auditions were really fun! It was really exciting to have Ms. Davis back, and we’re really excited to just be able to put on the show,” Koretsky said.

Ms. Andruski did not respond to Tide’s request for comment.