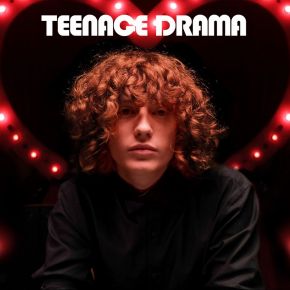 From his lyrical honesty to the monster views on his hilarious viral videos, it’s been a year of runaway success for the 19-year-old.

We caught up with Michael to talk Teenage Drama, Tik Tok, and his recent knockout performance with Bastille.

Purple Revolver: So it’s been officially out for a week – how do you feel and what kind of response did you get?

Michael: “I had a very good response. It’s by far my best-received song in terms of streams, so I’m super happy.

“We took about eight months to release the song and it feels good to get it out of my system.”

The singer-songwriters’ inspiration for Teenage Drama came from listening to “male manipulative” music, which are songs seen as validating destructive control over others.

The band Chase Atlantic is one of the artists he named who used this theme, saying “obviously I don’t condone his behavior BUT it sounds really good in the songs for some reason.”

“It’s very ironic and I wouldn’t take it too seriously. I don’t think in real life I’m a male manipulator; I’d say I’m probably nicer than that.

The idea for the Teenage Drama music video came after watching one of his favorite James Bond movies – Casino Royale.

Michael: “The poker scene is really cool, and the aesthetic is great.”

“Knowing that we were to shoot a music video for a teen drama, I didn’t want to do another one where I would sing in front of the camera, because I’ve done a few in a row recently.”

“So we took the drama of poker which is quite adult and made up for it by using a young cast. I’m really happy with the way the video came out.

In just over a year, Michaels’ music videos have gone from home-shot footage to fully produced scenes.

He commented on the process: “It’s very different and maybe more stressful in some ways because there are more people and more money involved.”

“But the result is much cooler, but that doesn’t mean you need money to make a good video.”

“I remember shooting one of my first songs called Vodka, and I still love that video because it’s so raw. There’s something about it that I couldn’t have captured with a whole film crew there.

One of the singers’ biggest accomplishments to date is supporting the famous band Bastille at their concert in late January.

Michael recalls, “It was surreal because I listened to them for so long and they influenced me and the music I make so much.”

“To be able to meet them and support them – I still can’t sign up even though it was a few weeks ago.”

“They’re really super nice people, which is crazy because they’re huge. They still took the time to chat with me, my family and my friends. It was brilliant.”

When asked how it all happened, he said with a smile:

“I’m not entirely sure to be honest but it had a lot to do with their manager who is wonderful too Emily and Tom on my label. I’m so grateful to everyone who made this possible because it is something I will never forget.

Unfortunately, he didn’t get a chance to star in Teenage Drama while he was there, but he’s sure he will soon.

Michael: “It was really frustrating because the notice was so short, so we didn’t have time to rehearse new material. We still had a great set that we had been doing since September.

The West-Kirkby-born singer admires bands such as The Killers and The 1975. When asked who he plans to support next, he replied:

“I would like to support a lot of different people, but I really want to get out and play. Both would be a dream, but I don’t think it will happen.

Michael: “I would never have said that I would support Bastille until that happens, so who knows, but I will play with whoever gets me.”

The 19-year-old’s relatable lyrics speak strongly to his Gen-Z audience and are evident in Teenage Drama.

The first teased songs on Tik Tok were a promising start for its release, with a snippet of the chorus receiving 11,000 likes.

With over 670,000 subscribers on the platform, the musician is well known for his short comedy content.

He added that Tik Tok mainly helps promote his music:

“I don’t think I would be where I am without it. Probably most of my musical audience has come from Tik Tok for the past year and Teenage Drama has been my biggest use of the platform in a musical sense.

“His popularity has translated into streaming numbers, so I hope to replicate that again.”

Something we are all dying to know is if there is a secret to his success on Tik Tok. He said with his usual charm, “You know what no, I think if I knew I would be a millionaire.”

2022 promises to be a triumphant year for Michael, with an EP in the works and even the hope of an album.

“I don’t know what song will come out next, but I sing a lot about relationships. I think they are more interesting than the previous ones, as less generic. Most of the songs I’ve written recently are about stress.

The singer is also lined up to take the stage at the Neighborhood Weekender festival in May and says, “I just want to release a lot more music, play more festivals and shows.”

We can’t wait to see what he does next.